There are several reservations about the color black, especially regarding food. Interestingly, no one wants to eat anything black. Genetic modifications and advanced agricultural techniques allow for the cultivation of various crops with various colors. So, could the black insides of ghost peppers be a product of science or nature?

You would probably find your ghost peppers less desirable when you notice black coloration inside them. Additionally, the internal blackening of the peppers affects their yield and decreases their market value. So in this article, we will go over all you need to know about what makes ghost peppers black on the inside. Let’s get started!

Is It Normal for the Insides of Ghost Peppers To Turn Black?

Ghost peppers take on their original color from the inside out with their white seeds. As a result, it is pretty strange for ghost peppers to turn black inside. Usually, the black coloration of ghost pepper insides affects both the seeds and the fleshy part. Essentially, this blackening does not initially happen from within the pepper.

Ghost peppers and pretty much other species of peppers begin blackening from the outside and gradually eat inside the fruit to affect the seeds. While ghost peppers whose insides have turned black might not be deadly or dangerous to consume, they are not advisable.

The reason is that ghost peppers are one of the world’s hottest peppers and are pretty tough, and it means that they are reasonably disease resistant. Therefore, a blackening of the insides of ghost peppers indicates that something is not correct. If you are a commercial pepper farmer, you might want to take precautions to avoid poor yields.

What Blackens the Insides of Ghost Peppers?

The insides of ghost peppers can turn black for several reasons. Here are some:

Pests and diseases are the first reasons for the internal blackening of your ghost peppers. Even though ghost peppers are hybrid and, as a result, somewhat pest and disease resistant, they are not invincible.

A typical example of a ghost pepper pest in the United States is the pepper weevil. Besides pests, bacteria also affect ghost peppers from their leaves to their fruits, leading to blackening of the insides. Most diseases affecting ghost peppers are fast spreading and can raid an entire garden.

Therefore if you notice any affected plant, you should begin the pruning process as soon as possible.

Unlike the way the name sounds, blossom end rot is not a disease but a nutritional deficiency caused by poor cultivation, like wrong watering. Blossom end rot is a darkening of the ghost peppers from the bottom of the fruit upwards and through the entire fruit, eventually corrupting the insides.

It is a condition that develops due to calcium imbalance in the plant, causing the inability to produce healthy skin on the fruits. As a result, the insides are exposed to quick blackening, compromising their taste and flavor. The ghost pepper needs calcium to build its plant cell wall, similar to humans needing calcium to build strong bones.

Ghost peppers have pretty delicate needs because they are a hybrid variety. Therefore you need to care for your growing ghost peppers, especially during the early stages. The reason is that blossom end rot affects the initial fruits, which means you can correct it so that it doesn’t affect other fruits that form later on.

The best way to avoid this menace is to water your ghost pepper plants regularly but not excessively. You need to maintain a healthy water balance whereby the plants are not getting too much or too little water.

Such peppers are neither diseased, malnourished, or spoiled. The purple hue of black ghost peppers is due to an anthocyanin pigment in the pepper’s skin. Jalapenos are also an excellent chili species that express a natural black variety. However, the lack of shade for most naturally black peppers is not permanent and eventually lightens out to bright red when fully ripe.

Fun Fact: Most varieties of black peppers get darker with more exposure to sunlight because sunlight increases the production of anthocyanin compounds in the fruits.

How To Prevent the Insides of Ghost Peppers From Turning Black

The insides of your ghost peppers will likely turn black without your knowledge. Essentially, you might wake up to the realization of the blackening process. Therefore, the best way to prevent it is by being proactive.

A clear understanding of the possible causes of the internal blackening of ghost peppers will save you from incurring poor harvests. As a result, you should exercise extra care during the planting process, nurturing up to maturity.

Here is a ghost pepper care table highlighting all you need to care for your ghost peppers to prevent the insides from turning black.

When Do the Black Insides of Ghost Peppers Mean Spoilage?

Not all internally blackened ghost peppers are spoiled, and even though they may be harmless, they may not offer the best flavoring and utility.

Regardless, here is a table summarizing the tell-tale signs of spoiled ghost peppers.

What Does It Mean When My Pepper Is Black?

Should You Eat Peppers With Black Spots?

What Type of Chili Pepper Is Black?

The black cobra chili peppers are harvested black, and they remain black for a few weeks before turning into their characteristic ripe red color. The black color depicts the pepper’s maturity for picking.

Now that you know the mechanism behind the darkening of the insides of ghost peppers, we hope that this piece provides a handy guide to help you prevent and manage such surprising situations. More importantly, because ghost peppers are sensitive, you should exercise great caution from the seeding stage to raise healthy and normal ghost peppers. 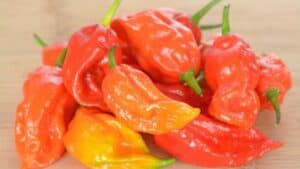 Can You Plant Habaneros and Jalapeños Together 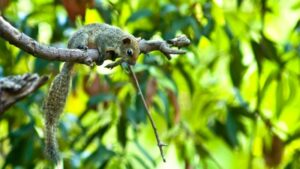 What Animals Eat Ghost Peppers? Is it Safe?