No one knows when or how human civilizations started eating hot peppers. Believe it or not, some people have a remarkable ability to withstand hot peppers. Interestingly, the world continues to seek ways to create the world’s hottest pepper which they grade by the Scoville rating.

Although there are other hot peppers, people enjoy eating ghost peppers because of their additional fruity flavor. The fruity plus burning sensation gives the ghost pepper its unique flavor. Ghost pepper contains capsaicin, the phytochemical responsible for hotness. Capsaicin interacts with the mouth receptors, creating a feeling of pain that the brain tries to compensate for by releasing endorphins to make the consumer feel good.

Spicy food consumption is increasing worldwide, and an appetite for spicy foods creates the need for even hotter peppers. Interestingly, ghost peppers once held the Guinness book of records for the world’s hottest pepper in 2007. Now imagine such intensity, and why would people want to eat something so hot? Let’s find out what makes ghost peppers a delight for some people.

The ghost pepper is scientifically known as Bhut jolokia, literally meaning Bhutan pepper and is cultivated widely in Northeast India. It is an interspecific hybrid form of chili. As a result, it also contains the active phytochemical in most chilis, capsaicin.

Ghost peppers are a hybrid of Capsicum Chinese and Capsicum frutescens, a fusion of chili and fruit features to yield a unique spicy yet fruity flavor. Ghost peppers are special because their hybrid nature combines the characteristic chili hotness with a fruity flavor. Also, their thin bumpy skin contains a considerable dose of capsaicin, making their skin as hot as the seeds and insides of other hot peppers.

Ghost peppers are indigenous to Indians, and because of their unique properties, together with the widespread love for spicy foods, spread the love for ghost peppers across the world. They measure about a million Scoville heat units for their somewhat small dimensions of 2.5 to 3.5 inches long, just about the size of an adult thumb.

Here is a table summarizing the essential features that make ghost peppers unique and appealing.

Fun Fact: Ghost peppers won the Guinness record for the world’s hottest chili pepper in 2007 for their unique spiciness and intense flavor, over 170 times hotter than the United States Tabasco sauce.

How Science Explains the Pleasure of Eating Ghost Peppers

Aside from their unique hot and spicy flavor with a fruity blend, there is a more scientific reason why people enjoy eating ghost peppers. The capsaicin hits your mouth receptors when you eat ghost peppers and tricks your brain into thinking your body is on fire. As a result, you experience the involuntary response of sweating, hyperventilations, and tearing and producing mucus from your nose.

Your brain thinks you are in distress and tries to make up for it by stimulating the production of endorphins. Endorphins, also known as the feel-good hormone, kick in to fade the painful feeling. As a result, people learn to associate eating hot and spicy foods with happy feelings. A significant reason chilis are part of pepper eating contests is that they generate excitement for participants.

The release of endorphins creates a wave of relief that causes you to desire to repeat the cycle because it feels more like a rush of adrenaline. Sometimes, a specific personality might be more inclined to eat more hot peppers than others.

Studies affirm that people with daring characters are more likely to like eating ghost peppers than others because it panders to their love for an adrenaline rush. Eating ghost peppers gives the same feeling as riding a roller coaster for most thrill-seeking people.

Ghost Pepper and the Scoville Rating

Ghost pepper has a pretty intense flavor, and has a unique combination of hot and fruity that creates a warm feeling of slow creeping heat through your body. It is classified among the insanely hot peppers in the world. It measures about 1000000 SHU (Scoville heat units), but it’s also great to understand how it relates to other species of hot peppers to appreciate why people enjoy it.

Fun Fact: Not until the 1980s was it generally accepted that the benchmark for the world’s hottest peppers was about half a million Scoville heat units.

People do not just enjoy eating ghost peppers but use it for other stuff. Here are a few other uses of ghost peppers.

Here are some examples of ghost pepper recipes that most people appreciate in several global restaurants:

With several ghost pepper recipes and the widespread acceptance of hot and spicy foods, people only build higher tolerance for hot peppers.

What Makes Ghost Peppers Such a Big Deal?

Ghost peppers are a hybrid form of Chinese chili pepper. As a result, they combine incredible hotness with a fruity flavor to create their uniqueness. Ghost peppers are used in curries and pickling brine and have gained massive recognition in the West for making hot sauces and other delicacies. Ghost peppers are a unique feature of pepper eating contests because of their intense heat.

Why Do People Enjoy Eating Hot Peppers Such As Ghost Peppers?

Hot peppers activate the pain receptors in the mouth, which the brain interprets as pain and heat. The brain tries to compensate for the burn by stimulating the release of a feel-good hormone to counteract the painful feeling, creating a pain/pleasure loop that keeps people coming back for more.

Is Eating Ghost Peppers Good for You?

As crazy as it seems to like ghost peppers, there are some health benefits of eating ghost peppers. They are spicy vegetables low in fat and calories, making them less likely to contribute to cardiovascular diseases. Ghost peppers also contain a reasonable amount of vitamin C, and the phytochemical capsaicin is responsible for most health benefits of the pepper.

The pleasure of eating ghost peppers is both due to nature and nurture. At the same time, the chemical reactions in the brain facilitate the craving for more hot peppers through a feedback loop. People train themselves to become tougher by increasing their endurance for hot peppers. 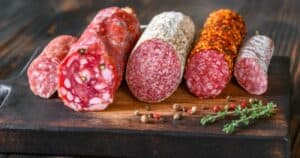 How Spicy Is Andouille Sausage? +Facts