Red ghost peppers are one of the hottest chilis you’ll ever know. However, do the green ones taste or feel any different? While it can be discomforting to consume unripe fruits, one has to wonder if consuming unripe ghost peppers makes any heat difference.

Ghost peppers are still hot in their green, unripe state. However, they are not at their hottest because they are yet to fully produce their phytochemical, ‘Capsaicin’, and evenly distribute it through the pepper. They instead have a grassy flavor added to their mild hotness, making them suitable for salads.

In general, peppers harvested while they are still green possess the least heat, even on the Scoville scale. However, for a one-time world’s hottest chili, is there supposed to be a difference? Let’s find out if ghost peppers are still as hot when green in this article!

Is It Normal for Ghost Peppers To Be Hot When Green?

Yes, it is normal for ghost peppers to be hot when green, and in fact, expected. Ghost peppers, also known as Bhut jolokia are one of the hottest chili peppers in the world with a Scoville rating of about 850000 Scoville heat units to 1000000 Scoville heat units. Such intense heat is due to the early production of the chili phytochemical responsible for pepper hotness, ‘capsaicin’.

Even though green, unripe ghost peppers are mildly acidic with a green grassy flavor mixed with a subtle floral note, they still possess delayed heat. The heat from the green unripe ghost peppers is slow and gradually builds a heat intensity that lingers on your palate before you know it.

Although it has not been scientifically confirmed, public and private agricultural schools of thought believe that the green, unripe ghost pepper’s capsaicin, though in little quantity also binds slowly to your mouth receptors, causing a delay in perception which accounts for its mild heat compared to the ripped red or orange ones.

Fun Fact: On a lighter note, the gradual and delayed heat of green ghost pepper feels and sounds like its name, since the heat sneaks up on you! Ghost is also a direct translation for the Indian nominal designation for Bhut jolokia!

Why Are My Green Ghost Peppers Not Hot, What Factors Are Responsible?

All chili peppers have their heat deeply ingrained within the membranes of the fruit and seeds. As a result, whether ripe or unripe, your ghost peppers should exhibit that characteristic heat quality.

Although you would generally expect less heat from any green pepper, or ghost peppers, they retain their heat, except mildly and laced with the immature, unripe grassy flavor. Several factors contribute to your green ghost peppers losing their heat when fresh from the stalk.

There are chances that the absent heat might be due to a combination of some initial planting factors. Here are some of them.

Reasons Why Your Green Ghost Peppers Might Not Be Hot

The quality of your soil can significantly impact the spiciness of your ghost peppers. You should aim for soil that is rich in essential nutrients and minerals, especially sulfur. Sulfur is an essential contributing factor to pepper capsaicin. Also, your planting soils must be well aerated and easy to till to enable your ghost pepper seeds to develop solid rooting during the seeding process.

Your seed viability is critical to getting true ghost peppers at maturity. It is best to taste the seeds before buying or get an initial quantity for cooking to ascertain the hotness of the pepper seeds before buying. You should also ensure that you get your seed supply from a reputable vendor. For instance, Ohio Heirloom seeds offer viable ghost pepper sees at $5.49.

Poor cultivation practices like overwatering, and over fertilizing can affect the outcome of your ghost peppers when they start fruiting, causing a dilution of the soil’s sulfur content and fruit capsicum and capsaicin content. Most hot peppers like those from the chili family require significant heat, sunlight, and a reasonable water supply to thrive.

It is the reason why ghost peppers thrive in Northeast India, where the climate is hotter. If you have to grow ghost peppers in temperate regions, you should begin cultivation indoors, away from the risk of frost and lower temperatures.

Why Are My Ghost Peppers Turning Green?

Ghost peppers turn green as part of the maturation and ripening process which usually takes about four to six weeks. Essentially, your ghost peppers pass through several color changes to attain complete ripeness. Therefore green ghost peppers are the unripe and immature stage of the fruit, but it does not in any way remove its spiciness.

In other words, green ghost peppers are just as spicy with mild heat and a grassy fruity flavor, except they are slightly hotter than the fully ripe red ghost peppers. As the ghost peppers attempt to complete their maturation cycle, they initially begin with bright green color and as time progresses, they lighten into lemon green and other shades.

Here is what we mean!

If you purchased the seeds for purple, brown, or peach ghost peppers, they will all begin with the color green once they start fruiting. However, the initial green color gradually fades through several lighter shades until the pepper attains maturity and maximum ripeness.

Fun Fact: All green ghost peppers are unripe/immature versions of the hybrid chili and not a different species!

Below is a table showing some additional information you might need before planting a ghost pepper garden.

Green ghost peppers are mildly hot and therefore possess less spiciness compared to their red counterparts. The reason is that they contain less capsaicin and instead have a green, grassy flavor that makes them a salad and other raw recipe favorites. However, they are way spicier than bell peppers.

Harvesting ghost peppers while green will cause the plant to produce more fruits. Essentially, it means picking them in their premature state which you can keep later to ripen. Picking green, unripe ghost peppers gives you more harvest while picking them ripe and orange or red leave you with a few.

Why Are My Ghost Chili Peppers Not Hot?

When ghost chilis and all chilis, in general, fail to attain hotness, it could be due to several planting factors. Examples of such factors include but are not limited to poor soil, wrong garden site, ghost pepper seed variety, poor cultivation practices, etc.

Even though green ghost peppers are still hotter than the mildest peppers on the Scoville rating scale, they are not at their hottest intensity until when they turn red. The ripening process allows the ghost peppers to deposit enough capsaicin to go around the pepper, thus eliminating the grassy flavor associated with green ghost peppers. 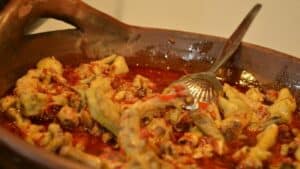 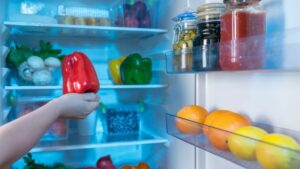 How Long Does Spicy Food Last in the Fridge? 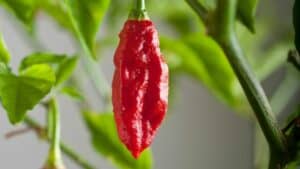 How Long Does It Take For Ghost Peppers To Turn From Green To Red?