Spices are essential in preparing both spicy Indian curries and luscious Indian meats. Indian foods are notorious for being overly spicy, causing people’s noses to run and struggle with the intense flavors. So you may come to wonder what the scale of on Indian foods is? This article will discuss everything you need to know about the scale of spicy food in India in detail.

The popularity of spicy foods has increased in India by more than 4% since 2017. Three chilies signify a high level of heat (think Vindaloo); two chilies suggest a medium level of (think Rista); one chili indicates delicate and mild (think Laal Maas); and where there aren’t any chilies, expect foods that will please your taste buds without the burn!

Spices have been scientifically shown to prevent food from spoiling, which is why north Indian cuisine is so hot. Bacteria and foodborne pathogens cannot thrive in the heated climate supplied by spices. Spicier cuisine is seen in countries with hotter environments. We have a proper guide for you explaining the spiciest food in India and much more. So, if you want to learn everything about Indian food, read further!

What Are The Spiciest Indian Dishes?

With three teaspoons of chili powder, the curry is produced with chicken or tomato, ginger, fresh and dried chilies, and three teaspoons of curry powder. Phall is often regarded as the world’s spiciest curry, and it may also be the spiciest cuisine in general. It usually employs ten distinct peppers, ranging from the relatively scotch bonnet and mild habanero (with 100,000 to 350,000 Scoville units) to the weaponized Bhut Jolokia.

Vindaloo is a popular and well-known cuisine from the Maharashtra state of Goa. Its etymology alludes to the Portuguese: ‘vin’ refers to vinegar, while ‘ahlo’ refers to garlic in Portuguese. Pork meat, fiery chili peppers, loads of garlic, vinegar, and various spices are commonly used in this tingling, flavorful curry. Every bite of Vindaloo satisfies your taste receptors while also leaving you wanting more. Remember to brace yourself for the impact before you dive into this mouth-watering hot curry!

This hot lamb meatball curry is a very flavorful and aromatic Kashmiri dish made with red chili powder and other spices. The meat in this dish is first pounded on a wooden log with a unique wooden hammer before being rolled into soft and juicy meatballs that are then tossed into the curry. Tomato, garlic, ginger, red chili powder, and other spices are used to make the gravy. Rista, richly aromatic and delicious, is ideally served with Naan and cumin rice.

Whenever you visit Rajasthan, Laal Maas will undoubtedly be on your must-try list. This meal, which translates to “Red Meat,” is made with a particular variety of chilies called Mathania that can only be found in Rajasthan. Mutton is slow-cooked with entire red Mathania chiles and raw spices. This rich dish has a spicy, smoky flavor due to the cooking and ingredients. For centuries, Rajput warriors in the state have savored the extremely spicy cuisine.

Tamil Nadu’s Chettinad is one of India’s spiciest and most flavorful cuisines. Chettinad cuisine is known for its use of a wide range of spices to prepare primarily non-vegetarian dishes. The dishes are spicy and aromatic, with fresh ground masalas and a boiled egg on top, traditionally regarded as a meal’s most crucial component. They also use a range of sun-dried meats and salted veggies, keeping with the region’s dry climate. Fish, prawns, lobster, crab, chicken, and lamb are the only meats allowed.

Don’t want to break the bank for flying to India to try the spiciest food? No problem! There are plenty of options for all-you-can-eat spicy Indian food in the US without breaking your budget.

Why Is Indian Food So Heavily Spiced?

North Indian food is one of the spiciest in the world. The Mughal monarchs brought a combination of Indian and Persian cuisines, which gave birth to modern-day North Indian cuisine. Babur, the first Mughal emperor, did not live long enough to build a royal cuisine that would one day be associated with his name. However, he started a trend of employing Indian cooks to produce Persian meals using locally sourced ingredients.

The temperature difference between northern India and Babur’s homeland was a significant issue. India was significantly hotter, and the food was quickly spoiling. What is the solution? Make it spicier! Spices have been scientifically shown to prevent food from spoiling, which is why north Indian cuisine is so hot. Foodborne pathogens and Bacteria cannot thrive in the heated climate supplied by spices. Spicier cuisine is seen in countries with hotter environments.

Which Is The Hottest Chilli Pepper Found In India?

Spices from all around the world are used in Indian cuisine. The Bhut Jolokia chili has been identified as India’s hottest chili pepper. The ‘ghost pepper’ is another name for it. The plump look of the Bhut Jolokia is well-known. It is noticeably pungent when the aroma wraps around a pair of nostrils.

Capsaicin is abundant in Bhut Jolokia. One of the active ingredients in chilies and peppers is capsaicin. However, the placenta is the only source of capsaicin in most of these foods.

In Bhut Jolokia, the material is more evenly distributed. It’s located everywhere over the chili, which amps up the heat. The is thought to have over 1 million Scoville Heat Units (SHU). The Bhut Jolokia is available in a wide range of colors and flavors. This adds to its one-of-a-kindness. Green and purple are examples of possible colors.

They were the world’s hottest peppers, having been named the World’s Hottest of All Spices by Guinness World Records in 2006, but were subsequently dethroned by a new generation of super-hot chili peppers. The hottest ghost pepper is 416 times hotter than the mildest jalapeno pepper, with a Scoville Heat Unit rating of around 5,000 and 208 times hotter than the typical jalapeno pepper.

Chinese cuisine has been the second most popular after native cuisine, but Indian cuisine has gradually gained popularity and displaced Chinese cuisine. Indian food, by and large, has one thing in common in comparing the two culinary disciplines in terms of ingredients, flavors, and cooking processes.

What is the Scoville heat level of Indian curry?

Spices are well-known in India. Aroma, flavor, and come naturally in Indian cuisine! In fact, without the usage of spices, Indian curries would be incomplete. Spices help with digestion and have anti-inflammatory qualities. Have you tried any of these spicier Indian dishes mentioned above? Let us know in the comment section below. Hopefully, with the help of our article, you now have in-depth knowledge of the Scale of Indian foods. 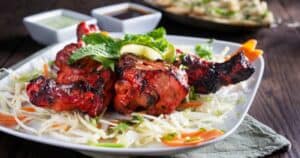 Is Tandoori Spicy? How Hot Is It? 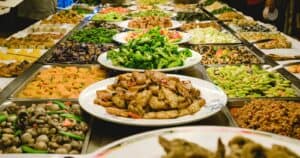 16 All You Can Eat Vegan Near Me 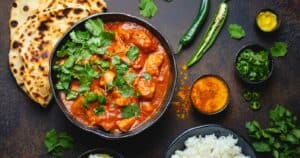 What Does Chicken Tikka Masala Taste Like? Is It Supposed To Be Spicy?