Have you ever sat down with a fresh bowl of noodles and taken a bite, only to feel as if your mouth is on fire? If so, then you may come to wonder how to make Korean noodles less spicy? This article will discuss everything you need to know about that in detail.

Use a dairy product to lessen the spiciness of Korean Noodles. Transfer the noodles to a pan, add a couple of tablespoons of sour cream or heavy cream, and toss well to coat the noodles evenly. You can also add cheese to your noodles. Like other dairy products, cheese reacts to heat in the same way.

Korean noodles are famous since they are one of the cheapest meals available. It is a wonderful yet economical supper that almost anybody can make. They are also addicting, which is one of the reasons they are so popular. They’re made with a particular chemical called kansui, which makes us crave them. So, if you want to learn more about Korean Noodles, read further!

What Are Some Mild Korean Noodles?

There’s a common misunderstanding that all Korean noodles are spicy, but this is not the case. Though some noodles will test individuals with a low tolerance for spicy foods, it is possible to exist in Korea without tasting anything that will make you beg for glasses of water.

In reality, most famous and well-liked Korean meals are devoid of spices. On your next trip to Korea, try these delicious and non-spicy Korean noodles:

If you like delicious noodles, you’ll enjoy these vegan japchae noodles! Japchae is a dish of stir-fried glass noodles with precisely cooked veggies, mushrooms, and a rich soy-based sauce. It’s a great vegan main course.

Sweet potato starch noodles, often known as glass noodles, are used to make japchae. These deliciously chewy noodles have a low glycemic index, but they don’t provide many nutrients. Their allure stems from their incredible texture and propensity to soak up the sauce in which they are stir-fried.

Because fresh stir-fried vegetables and mushrooms are equally as crucial as the noodles, vegan japchae is still a healthful dish.

The carbo flavor has a strong pasta aroma and looks the part with flecks of parsley incorporated. It tastes fantastic, with a pasta-like flavor. The is also kept to a minimum in this one.

The artificial chicken flavor is mentioned in both the hot chicken ramen and the carbonara flavor. The cheese powder adds a slight creaminess to the ramen on the plus side. The sauce, like the original, is fantastic because it has a sweet taste, but then you get stuck with a wave of mild .

The sauce’s base is Korean black bean paste (chunjang) produced from flour, soybeans, fermented, and caramel. Ingredients such as onion, zucchini, and pork are sautéed and combined with the paste, a cornstarch slurry, and water to form a gravy-like sauce that coats the noodles.

Each bite has a distinct maize flavor, which is pleasant. Aside from that, there wasn’t much elote flavor. Based on spiciness, it’s closer to the bottom of Samyang’s menu but not quite as light as the carbonara ramen. It’s spicy enough to make you breathe air to cool your mouth but it’s not that hot to have you go for a drink of milk or water.

How Many Scoville Units Are There In Korean Fire Noodles?

Scoville Units for Korean noodles depends on whatever variation you eat. The bowl box of Korean Fire Noodles has a Scoville rating of 3,210, while the cooktop container has a rating of 4,404. As a result, Korean fire noodles are about as fiery as a regular jalapeno pepper.

The Scoville Heat Units in new Haek Buldak Spicy Chicken Ramen, often known as 2X Fire Noodle to non-Koreans, is 10,000. The renewal increased the Scoville Unit count by about 2,000, making the 2X Fire Noodle the hottest ramen in Korea.

If you read the package of the noodles after you buy them, you’ll see that some of them list the Scoville Heat Units on the back side. If you like jalapeno peppers and can manage the heat, you might be surprised that this is a little hotter.

Is It Unhealthy To Eat Korean Spicy Noodles?

Korean spicy noodles, in general, are not unhealthy for you and can make an excellent quick dinner. However, because they have little nutritional value, it is advisable to consume them in moderation.

So, what happens to your body when you eat spicy ramen noodles? Instant noodles have very high sodium content. It contains 81 percent of the FDA’s recommended salt intake for one adult. High sodium levels in the body can cause major health problems. This can lead to high blood pressure, in the long run, making you more susceptible to heart disease.

Because of the high levels of carbs in instant noodles, they may cause further health problems. A healthy adult should consume 225-325 g of carbs per day, according to the American Food and Drug Administration (FDA). A significant percentage of this value is contained in a single packet of ramen noodles.

Excess carbohydrates can raise the metabolic load on the body, resulting in weight gain and an increased risk of heart disease. You may make your Korean noodles healthy by adding vegetables like carrots, green onions, tomatoes, broccoli, leeks, and mushrooms, depending on your own preferences and likes.

Which Korean Noodle Has The Most Heat?

A South Korean company, Samyang Foods, was crowned the world’s most spicy instant noodle. This unusually spicy roasted chicken ramen has a SHU rating of over 8,000. It is believed to be so hot that some people on social media have challenged themselves to eat an entire bowl.

Which Samyang Noodle Has The Least Amount Of Heat?

Is It True That Korean Noodles Make You Fat?

Noodles will not cause you to gain weight as long as you do not consume more calories than you need. In contrast, instant noodles are a high-glycemic snack that has the potential to upset metabolic processes in some people. They should be regarded as a special occasion dish rather than a regular one. 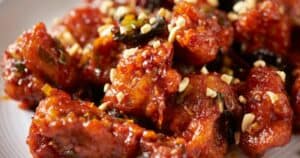 How Spicy Is Yangnyeom Chicken? (Explained With Recipe) 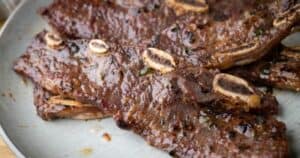 How To Cook Korean Short Ribs In Oven (Recipe) 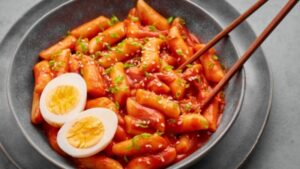