If you’re thinking of taking the plunge into the latest TikTok craze, the One Chip Challenge, you may want to think again. This challenge is a tall order even for the most seasoned spicy food veterans, leaving many curled up in a ball. But how hard on the body is it?

The One Chip Challenge hurts the stomach of most people who attempt it. However, this pain is usually temporary. How much it hurts depends on factors such as an individual’s pre-existing medical conditions and the degree of preparation for the challenge.

I’ll give further information on the effects of the challenge throughout this article. I’ll also explain some of the science behind spicy food and how to prepare for it.

The One Chip Challenge’s Effects on the Stomach

Some people can eat spicy chips with little effect, while others are completely incapacitated. While it depends on various factors like medical conditions and what the participant eats before the challenge, the Paqui chip tends to lead to severe reactions.

As your stomach digests the spicy chip, your nerve endings interact with the capsaicin, leading to a great deal of discomfort. But the oils won’t cause long-term damage. For most people, the pain passes with time. Some people recover quickly, while others recover more slowly, depending on their spice tolerance.

The One Chip Challenge Explained

Spicy chips come and go seemingly every year, each one attempting to hit a home run with lovers of extreme heat. Paqui chips are no different. The brand has several milder chip flavors like nacho cheese and zesty salsa verde, but they’ve gained fame for the spicier ones.

In 2021 they started a social media marketing campaign, calling it ‘the One Chip Challenge.’

The company sold individually wrapped chips that they claim are the hottest chip in the world, made with real Carolina Reaper and Scorpion Peppers – two of the spiciest known peppers, with Scoville Heat Units (SHU) of 2 million and 1.2 million, respectively.

The challenge is simple: eat just one chip and see how long you can go without eating or drinking anything. However, the extreme level of spiciness makes it impossible even for avid spice lovers to endure without remedy.

Reactions to the One Chip Challenge

Searching for ‘the One Chip Challenge’ online will yield results for hundreds of videos of teary-eyed people struggling to eat the spicy tortilla chip.

The challenge became so popular that schools had to warn parents that the chips were potentially dangerous to their children, with one student reportedly suffering from seizures after eating the chip.

Three students at another school in Lodi, California, were hospitalized after eating the chip, reportedly suffering from nausea, vomiting, and difficulty breathing. Such symptoms aren’t uncommon among those with little experience with spicy food.

Paqui even issues warnings on their products so that those attempting the challenge know what they’re getting into.

Paqui’s famous chip isn’t the only food that may lead to symptoms such as nausea and vomiting. Such reactions have been known to occur when consuming chili peppers like the Carolina Reaper and Scorpion that have such high levels of spice.

One man even “burnt a hole in his esophagus” after eating too much spicy food and vomiting as a result. Another study also showed that while it is rare, the esophagus can rupture from excessive vomiting due to the consumption of extremely spicy food.

Who Shouldn’t Do the One Chip Challenge?

Studies have shown that those with pre-existing stomach conditions such as Irritable Bowel Syndrome (IBS) should avoid too much heat. Exercise extreme caution when considering eating one of these chips because if you’re sensitive to spicy food, it could be disastrous.

There’s a reason why spicy food has such an effect on our bodies. It comes down to the oils inside the peppers, which are more potent in some than others.

Capsaicin is a compound found inside any pepper that makes it spicy. When eating spicy food, you’re ingesting an irritant that resulted from an evolution designed to keep you from eating it again. Unfortunately for most pepper plants, it’s exactly why most people want to keep eating them.

The compound interacts with sensory neurons to produce a burning sensation, which you experience when eating a chili pepper. In response, the body releases endorphins or happy hormones, making people want to continue eating peppers.

To record a measurement, the pepper is ground and added to drops of water until the spice is difficult to detect. The higher the Scoville number, the more water it takes to dilute the spice.

How Spicy Is the Paqui Chip in One Chip Challenge?

Paqui, the company that created the one chip challenge, didn’t record the exact Scoville rating of their chip. It’s difficult to measure the exact Scoville level of one chip, but you can see for yourself that it has a lot of heat. It’s also possible to guess since we know they use real peppers in their chips.

The Paqui Chip used in the One Chip Challenge is roughly 1.2 million to 2 million SHU. This range is based on the main ingredients used in the product, namely the Carolina Reaper pepper and the Scorpion pepper.

Originally from Trinidad and Tobago, the scorpion pepper is only slightly milder. It has a Scoville rating of 1.2 million. It takes 1.2 million drops of water to one drop of the chili to dilute it.

How To Prepare for the One Chip Challenge

As spicy food doesn’t sit well on an empty stomach, the first thing to do if you decide to attempt this challenge is eat something beforehand. Rice is a good option, as is bread, especially if combined with some form of dairy like cheese.

While eating, one of the best ways to mitigate the heat in your mouth and stomach is to drink milk.

If you want to take things to another level, consider taking bites out of citrus fruit like lemon or lime. The acid binds with the capsaicin before neutralizing it, making the spice levels more bearable.

What To Do if Experiencing Pain From the One Chip Challenge

Understand that after doing the One Chip Challenge, there will be pain. Unfortunately, this can’t be helped when dealing with something as spicy as Carolina Reaper peppers.

If the pain is manageable, try some of the tips above, like drinking milk or eating a slice of lemon. The pain should subside eventually. If you’re feeling overwhelmed, that’s normal too. Just take a break and lie down until the symptoms get better.

You’ll only want to consider medical intervention if you have a severe reaction that leads to things like difficulty breathing and excessive vomiting.

When considering consuming something as spicy as the One Chip Challenge chip, evaluate yourself to determine how much heat you can handle. It’s called a challenge for a reason, and you shouldn’t take it lightly.

With millions of SHUs, the chip will cause a good deal of pain. Take extra precautions to brace yourself for the intensity of the adverse reactions. Eat it at your own risk. 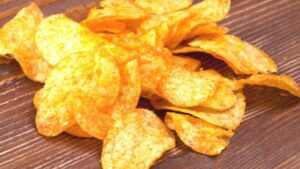 9 Best Things To Eat After the One Chip Challenge