Peppers (Capsicum annuum) are versatile vegetables in various forms and sizes. Peppers can be eaten fresh, boiled, or pickled and are used in multiple recipes.

While most people understand how to plant peppers in the yard, few know that peppers can grow vertically rather than outwards. This fascinating occurrence has a scientific explanation and might be advantageous for pepper growers wanting to maximize space in their gardens.

Factors That Affect How Peppers Grow

Have you ever wondered why peppers like to grow upwards? It’s as if they are trying to defy gravity and reach for the stars! Well, there are a few factors that cause this phenomenon.

If your peppers don’t have access to the nutrients they need, they’ll try to reach for whatever they can get, resulting in an upward growth pattern.

Peppers need ample water to grow properly and reach their full potential. If the water supply is inadequate, the plant will be stunted, and the peppers will lack size and flavor. If the environment is too dry, peppers may grow upwards towards a source of moisture.

This can be seen as a survival mechanism, as the peppers try to conserve water and reach a source of it quickly.

Peppers tend to grow toward the light to maximize their exposure. This is why they’re often seen growing upwards and towards the sun. This is why you will often find peppers in raised beds or pots, as they get more direct access to the sun.

Different varieties of peppers have varying needs regarding light, soil, and temperature, and the way they grow will reflect this. Some peppers grow tall, while others stay short and bushy.

I’ve even seen some peppers that look like they’re reaching for the sky! I guess it just shows that every pepper is unique, and no two are the same.

Effects Of Sunlight on Peppers

I’m sure you’ve seen it before: peppers growing up toward the sun! It’s a common phenomenon among gardeners, but why do peppers seem to do this? It turns out the answer lies in the power of the sun’s rays!

It all has to do with the effects of sunlight on peppers. Sunlight helps peppers to grow and develop better. It allows plants to produce more fruits and vegetables, and some researchers have even found that peppers may grow bigger when exposed to more sunlight.

But why do peppers grow up towards the sun?

As it turns out, peppers are susceptible to sunlight and will turn towards the sun to maximize their exposure. This phenomenon is known as phototropism, and it can be observed in many different plants.

Phototropism is especially evident in peppers because they are thin-stemmed and require as much sunlight as possible to produce the brightest and healthiest fruit.

So, while I’m sure my peppers appreciate the few extra rays of sunshine from their upward growth, I can’t help but feel like I’m being trolled every time I look at them!

Which Types of Peppers Are More Likely to Grow Upwards

Have you ever noticed that peppers tend to grow upwards rather than downwards? I know I have, and it’s always perplexed me. A few different types of peppers are more likely to grow upwards.

It turns out that bell peppers are phototropic, which means they grow toward the light. As sunlight moves across the sky, the bell peppers will naturally follow the morning, growing upwards to reach it.

It turns out that jalapeños are the most likely pepper to grow up instead of down. It’s something to do with the shape and consistency of the jalapeño. The thicker walls of the jalapeño create a built-in support structure that makes it easier for the pepper to stand up while growing.

In particular, poblanos seem to enjoy climbing toward the heavens! But why is this the case? Well, it’s quite simple. The peppers are looking for the best spot to soak up the sun and other nutrients – which happens to be up high!

Anaheim peppers, for example, are more likely to grow upwards than other types of peppers. This is because the Anaheim pepper plant grows in a vining way, so the pepper will naturally grow upward.

As a gardener, I’m often asked why peppers grow upwards rather than downwards like other vegetables. Well, I’m here to answer that question! It turns out that the soil composition and water levels have a lot to do with it.

The soil composition has a significant impact on the way peppers grow. The soil should be light and airy, and well-draining. The ground needs to be loose and fluffy enough to allow the roots to spread out, and it should be packed with nutrients. If the soil composition is off, the pepper plants may struggle to grow and may start to grow upwards instead.

Water is essential for peppers. They need to be watered regularly, but not overly so. If the soil is too wet, this can cause root rot, leading to the plant growing in odd directions, like upwards! So make sure to pay attention to the amount of water you’re giving your peppers.

Pruning will help keep your peppers from growing outward; instead, they will grow upwards. It’s essential to prune the lower parts of the plant and to remove any leaves which are blocking light and air from reaching the growing peppers.

Utilize A Stake or Trellis

Use a trellis when planting your peppers. Believe it or not, this gives the pepper plants something to grab onto as they reach for the sky. Not only will it help them stay upright and keep their growing branches in check, but it also helps prevent them from being weighed down by the fruits they produce.

Plant Peppers in A Pot With A Lid

Make sure your peppers are planted in a pot with a lid. This will help to encourage the peppers to grow upwards instead of outwards. The lid will also provide extra humidity, essential for pepper growth.

Make sure your pepper plants are planted in an area with at least 6 hours of direct sunlight daily. If the area growing your peppers in doesn’t receive enough sunlight, you can always add a few extra lighting fixtures to help supplement the daylight. It may sound a bit crazy, but trust me, it works!

The most important thing to remember is to keep the soil temperatures warm. Keep the soil between 70-80 degrees Fahrenheit. This can be accomplished using a thermal blanket, black plastic mulch, or a heat lamp.

Peppers love warm soils, so if you can keep the soil temperatures nice and friendly, your pepper plants will be more likely to grow up and not out. You can do this by mulching around your plants and providing adequate water. 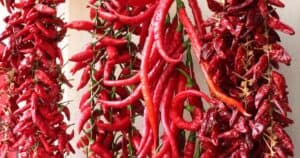 Calabrian Pepper Plant (How to Plant + How To Use)

Can You Plant Habaneros and Jalapeños Together

What Makes Ghost Peppers Black Inside