Chinese restaurants are known globally for their delicious spicy foods. Also, the spice combination is deep within the Chinese culture for cooking and other medicinal reasons. However, do Chinese restaurants use just one spice, or are there several spices behind the fantastic taste of their spicy foods?

Chinese cuisine is known worldwide as one of the spiciest foods, and, interestingly, they are also one of the most palatable and enjoyable foods. As a result, with so many do-it-yourself enthusiasts, several people want to know how many spices go into preparing one of the world’s most delicious dishes. Let’s find out the spicy food secret of most Chinese restaurants in this article!

What Are The Seven Essential Spices Used by Chinese Restaurants?

The five-spice powder is a five-in-one spice common in traditional Chinese culinary culture. Some chefs use it as a stand-alone spice that they can sprinkle as a food seasoning or marinade for meat dishes.

The five-spice powder combines five individual herbs and spices: cinnamon, star anise, cloves, fennel, and peppercorns. Together they yield an aromatic blend of spicy and slightly sweet flavors to create the taste balance that is unique to traditional Chinese cuisine.

Here is a list of the individual spices that compose the five-spice powder:

The Chinese cinnamon is the type of cinnamon used in making the five-spice powder. It is also known as cassia cinnamon or gui pi and is thicker and darker than your regular cinnamon.

Star anise is star-shaped, with eight protrusions and dark shiny seeds. It has a distinct flavor, perfect for stews, braised, and slow-cooked dishes. It is an essential component of the five-spice powder.

They are the dried, unopened flower buds of an evergreen tree and offer a strong sweet and pungent aroma in Chinese cuisine. Cloves can be used whole to make infusions or ground into powder as a seasoning, and they are perfect as meat seasonings and soup flavoring.

Fennel seeds are usually used in stews and preparing meat dishes. It has a licorice flavor similar to that of the star anise. It is used to make Chinese curry and is more common in the southern part of China and among women because of its traditional belief to enhance the yin aspect of the body.

Sichuan peppercorns are distinct for their spicy solid flavors, and they also possess a substantial numbing intensity that makes them similar to black peppers. They are used in Chinese cuisine to mask meat odors or mixed with salt for fish, meat, and vegetable dishes. In traditional Chinese medicine, peppercorns are used to treat stomach disorders and colds.

Fun Fact: According to traditional Chinese medicine, the Chinese five-spice is based on the five elements (fire, water, earth, air, metal), which they believe are manifested in different body parts. Therefore, an imbalance in these elements can result in illness. So, these herbs and spices have been used to restore balance in the body. In the same way, the Chinese five-spice powder became a culinary force for restoring gustatory balance in traditional Chinese cuisine.

Although ginger is a herb, it is loosely regarded as a spice used in most Chinese cuisines to season meat and fish. It is also an excellent flavoring for soups, stews, and sauces.

Although garlic has an off-putting smell, it is an essential spice in most Chinese spicy foods. It is used chiefly to make stir-fries with onions and meat and fish dishes. It also makes an excellent marinade agent for enhancing meat’s natural flavor to yield the fifth flavor–Umami.

Both black and white sesame seeds are vital in Chinese spicy food cuisine. They add texture and flavor to traditional dishes and are usually sprinkled on top of meals as garnishing. Sesame seeds also yield sesame oil, which is an essential component for making most sauces and Chinese dips.

They are popularly used in traditional Chinese cuisine to mask the odor of meat. Also, bay leaves are essential for making slow-cooked meat dishes because the flavor releases gradually with continuous heating. Bay leaves are also used for adding flavor to pickled vegetables.

Turmeric powder is mainly used as a blend with curry powder. It is famous for its natural bright yellow color, which adds color and excitement to most dishes. It is also a potent anti-inflammatory agent.

Below is a table summarizing the seven essential spices used in Chinese restaurants and other crucial details.

How do most Chinese restaurants cook so fast?

Chili powder is like an all-in-one spice used in most Chinese restaurants for spicy foods. It is an aromatic powder that combines the flavors of chili peppers, cumin, salt, garlic, coriander, cloves, allspice, and oregano.

What sauce is typical among most Chinese restaurants for spicy foods?

Chinese cuisine remains among the most appreciated dishes worldwide thanks to the proliferation of Chinese restaurants. The reason is that natural spice blends are rooted in ancient Chinese culinary culture. Now, you know the secret behind the spicy delight of most Chinese restaurants. Fortunately, you can use most of them at home to create the same effect! 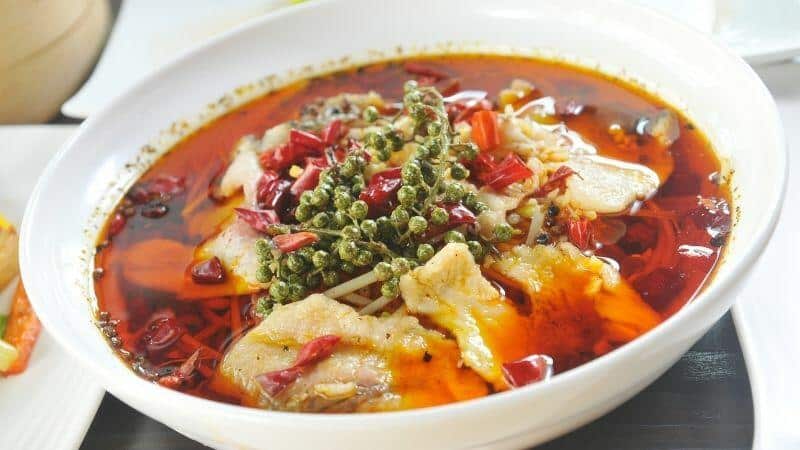 15 Spicy Chinese Dishes You Must Try