Two of the most-loved Arabian dishes, Mandi and Manakeesh, are also some of the mildest dishes in the world in terms of heat. Because of that, Middle Eastern food has gained a somewhat-deserved reputation for not being hot. However, there are a few dishes that can pleasantly surprise a spicy food lover.

Here are 6 spicy Middle Eastern food dishes to try for your next meal:

In this article, you will learn more about the Middle Eastern dishes you must try as a spicy food lover. Moreover, you’ll discover what makes them spicy, so you can be sure which one of the following you want to try first!

Since there is a larger Indian ex-pat population in Arab countries, the chili mix used to make spicy shakshouka is usually Indian. Even without the swap, the classic shakshouka dish is considered one of the spiciest ones in Arabian cuisine.

Because of its proximity of pronunciation with Shakshouka, Chakhchoukha can be overlooked. It is an entirely different dish that features think crispy bread broken into a stew.

As with most Middle Eastern dishes, where there is a stew, there is room for spiciness. While traditional Algerian Chakhchoukha is not as spicy as even mild Mexican food, one can request the spicy version, which contains hotter spices.

From cutting green chili into the stew to using a ground red pepper, Arab cooks use different methods to boost the factor of Chackhchoukha.

This dish can be easily ordered with a higher Picante heat because it is a festive dish that tourists get introduced to at different gatherings. A spicy version soon follows when an Arab plate gets exposed to a larger non-Arab audience.

Kebabs have transcended the Middle East and have become a global delicacy. From Britain to Afghanistan, there are many variations of kebabs, including:

Each version of kebabs has a spicier variation thanks to the mainstream appeal of kebabs. Because of the influx of tourists in globalized Arabian countries like the UAE and Qatar, kebabs have an audience beyond the mild-spice-loving Arabs. Most Arab restaurants offer a hot and spicy version of sheesh kebabs.

Matbucha is a marinated salad made by slow-cooking tomatoes alongside roasted bell peppers, garlic, and chilies. Depending on the ingredients used, Matbucha can be pretty spicy.

You can add the following to ensure that it isn’t as mild as the average Arabian dish:

If you have visited Greece, you might have come across a version of the Shawarma. In Greek cuisine, Doner is the term used to describe a rotating tower made from a rotating amalgamation of boneless meat or thick mince.

When meat chunks are chopped off a doner and wrapped in pita bread, it is called a gyro. Both the Doner and the gyro are called Shawarma in the Middle Eastern version.

Shawarma is slightly spicier than the average doner gyro. More importantly, you can order an even spicier version of the Shawarma by asking for a “mexiki” shawarma. While there is no Mexican spin-off of Shawarma or Doner, Middle Eastern restaurants have somehow decided that adding spices to Shawarma makes it Mexican. This is probably because of the association of Latin food with spiciness.

Mexiki shawarma, or Mexican Shawarma, remains a Middle Eastern invention despite its name and is available in almost all Arabian fast-food restaurants in the united Arab emirates, Saudi Arabia, and Qatar. It is also available in Kuwait and other Arab countries.

When the KFC franchise had not expanded enough globally to reach Saudi Arabia, Shakkour AbuGhazalah took the opportunity to make the Saudi answer to KFC. He founded Al Baik in 1974, and its secret recipe, alongside a lack of disclosure mandates, developed his restaurant franchise a cult following.

A google image search of the term “Al Baik Customers” will show you the craze surrounding this relatively new addition to Middle Eastern cuisine. Despite KFC opening its doors in the USA, a majority of Al Baik’s customers remain loyal mainly because the recipes are different.

Al Baik is significantly spicier, with visible hints of garlic and red pepper. It has inspired a movement where many fast-food restaurants in Middle Eastern countries offer “spicy broast,” which is the Arabic version of southern fried chicken.

Middle Eastern food is mild yet flavorful. But before dismissing it because of your love for spicy food, you must note that every Middle Eastern dish that gains global popularity also spawns a spicy variation.

Spicy Middle Eastern food items to try include shakshouka, Chakhchoukha, Kebab, Matbucha, Shawarma, and Arabian Broast. While their standard versions might not be very hot, their spicy variations are available on request from most Middle Eastern restaurants. 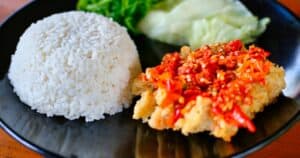 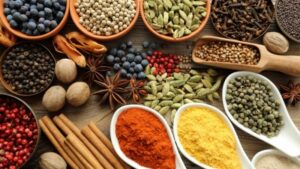