If you have tried Arabic food, you might have noticed that its flavor profile is milder than North American cuisine. After such an experience, you might wonder whether the mildness is specific to the dish or the cuisine in general.

In this article, you will find out more about specific spicy foods that have become popular in Middle Eastern countries. You will also learn about the spiciest Arabic cuisine (and where to find it). By the end of this post, you’ll know what to order in the Middle East as a spicy food lover and how to ask an Arabic restaurant to make your food spicier.

Arab food, pre-globalization, was relatively mild, and Middle Easterners were not exposed to hot and spicy food. However, since the influx of ex-pats and tourists resulted in the floor-crossing of cuisines, the Arab youth has become interested in highly spicy food.

Not enough time has passed to categorize specific Arab favorites as Middle Eastern food, but they remain some of the most-consumed dishes in the Middle East.

Let’s explore some of them:

Many mistakenly assume that Middle Eastern food is bland because western food without high-heat spices would be bland.

But is Arabian food bland? Arab food is not bland because they use half a dozen spices per dish. However, the spices used are relatively mild. Usually, Arab dishes have minimal heat factor but have an exciting flavor because of the diversity of their ingredients.

So, why the misconception?

Typically, because of a lack of alternative spices. Let’s oversimply this for explanation’s sake.

Let’s suppose you’re about to make a dish with only green peppers as the sole spice. The dish will be utterly bland if you remove green pepper from the recipe.

But does that mean every dish without green pepper is equally bland?

No, because other dishes do not use green peppers only.

While North American cuisine relies heavily on specific spices to amp up their Picante factor, their absence makes American food bland. But the food made in the Middle East is meant to taste good without those spices.

Consequently, it has an interesting flavor despite not using high-heat spices.

More importantly, Middle Eastern food has a canvas-like trait where you can add any spicy sauce to it and make it taste good. Because the food doesn’t already have a high volume of any specific spice, the addition of any sauce does not make it take incohesive.

While Middle Easterners have started enjoying spicy food, it seems like they do not morph their traditional dishes to satisfy their craving for high-heat dishes. When they feel like having spicy food, they order Mexican or Indian dishes.

You wouldn’t try to fix your craving for sugar by adding sugar to your corn soup. You would order dessert. Similarly, an Arab wouldn’t add hot spices to his Mandi just to have something spicy to eat. He would order something other than Arabic food. However, that doesn’t mean all Arabic food is mild.

Which Arab Country Has Spicy Food?

Tunisia has the spiciest Arab food as the locals enjoy swapping traditional Arabic baharat with high-heat spices. A Tunisian version of any Arab dish is a spicier version of it. However, it isn’t easy to get outside of Tunis because most dishes have the same names as the local equivalents in other countries.

Let’s take the example of a generic food item like fries. You will have a hard time getting American fries in Canada because Canadians will prepare fries the only way they know. Similarly, ordering Tunisian Shakshouka in Kuwait will get you regular Shakshouka. Unless you want to go to a Tunisian restaurant or Tunis itself, you’ll have to find an alternative way to get spicy Arabic food.

I cover the specific dishes with spicy variants available in almost every Middle Eastern country in my post on spicy Arab dishes. But even if you’re unable to get spicy versions of a Middle Eastern delicacy, remember that Arabic food got well with hot sauce, pepper sauce, salsa, and hot ketchup.

How to Get Spicy Arabic Food?

If you do not want to use post-serving sauces to make your Arabic food spicy, you’ll need to specifically get the spicy variation in one of the following ways: 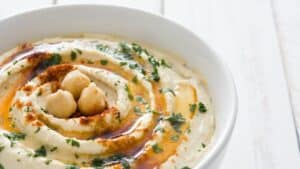 Is Hummus Supposed To Be Spicy? 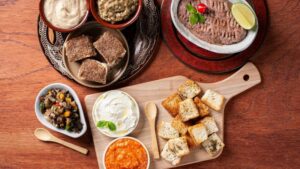 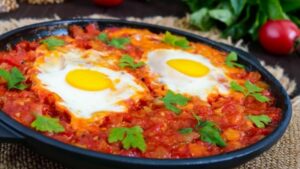