The Scoville Scale measures heat intensity and runs from mild to extremely hot. It’s easy to become perplexed when there is so much debate about what constitutes a mild, medium, or hot pepper. This article will discuss everything you need to know about how spicy is mild in detail.

Each of the Scoville scale’s ratings has a value associated with it. You will be looking at anywhere from 100 to 2,500 SHU or Scoville Heat Units for something that is considered ‘mild’. When you consume a dish that is too hot for you, you may get a burning sensation. This is your body’s signaling method that you need to cool down and take a break from the heat.

The hottest pepper is ghost pepper, with a Scoville heat unit of above 1,000,000. Because of their high heat, ghost peppers can be deadly to some people. Don’t go near the ghost peppers if this isn’t something you’re interested in. The Poblano pepper, which has a score of 1,000 to 2,000, is on the mild end of the spectrum. The Jalapeno is just above that, with a Scoville heat units range of 2,500 to 5,000. Keep on reading to learn more about the detailed knowledge of Mild Spices.

Which Is Hotter Mild Or Medium?

Medium is a step up from mild. When it comes to the spiciness of the food, it’s usually divided into three categories: mild, medium, and hot, with the last being the hottest. Even though medium and mild are commonly confused, you should always expect medium to be spicier than mild.

As the heat levels are practically comparable, many people have trouble distinguishing between medium and mild. Because there isn’t a lot of heat, to begin with, it’s difficult to know which is spicier. Furthermore, spiciness in food is a subjective sensation, with individual preferences and tolerances.

Why Is It A Big Deal?

Many people prefer spicy cuisine, and some can endure “hotter” foods better than others. What is the reason for this? The quick explanation is that each person’s body and sensory impressions are unique. The spiciness of different kinds of food is determined by the heat index of the dish and the taste receptors of the person.

So one individual may be extremely sensitive to scotch bonnet peppers, while another considers them as mild. Cultural influences and personal preferences play a part as well. People have preferences and dislikes and cultural food routes that expose them to varying degrees of spicy foods starting at an early age.

The Heat May Be All In Your Head

Peppers are physically painful for those who avoid spicy foods. But, according to Chef Bill Phillips, a hot foods expert and associate professor at the Culinary Institute of America, the heat is all in their brains. “Although it feels like it’s burning when they eat spicy food, it’s actually a mind trick. Spicy meals have no negative effects on a healthy digestive system.”

Fiery food tastes hot because chemical molecules like capsaicin trigger pain receptors on your tongue that are linked to the experience of temperature, not because it’s burning off your tastebuds.

What Are Some Mild Spices?

Turmeric is a popular spice made from the root of the Curcuma longa plant. Turmeric is a spice that derives from the rhizome of a ginger plant and is native to Southeast India. It is sometimes offered fresh, but it is sold dried and pounded into powder most of the time. Turmeric contains antioxidant capabilities as well as a slew of other health advantages.

Pepper is one of those spices we take for granted because it is so common. Pepper, like salt, is found on almost every table, both in restaurants and kitchens. It is the most extensively used spice globally, and it is utilized in cuisines all over the world. Pepper’s strong, spicy flavor makes it a potent ingredient in hot or cold, sweet or savory dishes.

Cinnamon is one of the most widely used spices globally, adding a spicy-sweet flavor to a variety of sweet and savory meals. Whole cinnamon sticks, ground cinnamon powder, and cinnamon essence can be found in the spice aisle. Cinnamon’s aroma and flavor come from its essential oil, which contains cinnamaldehyde and a variety of other compounds, including eugenol.

The coriander plant’s small, creamy brown seeds impart a warm, aromatic, and slightly citrus flavor to meals that are distinct from that of fresh coriander leaves. They’re popular in Indian cuisine and Asian, Middle Eastern, and Mediterranean cuisines. Although the flavor difference between ground and whole coriander is subtle, the powder is excellent for effortlessly infusing flavor into doughs and batters.

How Can You Tell If You Have A High Or Low Tolerance For Spicy Foods?

There are a few ways to figure out your spicy food tolerance, but the most frequent is to take a test. Spice levels linked with cayenne and habanero peppers are frequently used to measure how much spice you can tolerate.

For example, if you’ve never had an issue with jalapenos or black pepper before, that’s a fantastic starting point for you. Your tolerance for hot food influences how spicy you can eat at each meal. If you have a lesser threshold for heat than the average individual, you might choose a milder cuisine. You might wish to try a spicier dish than normal if you can withstand more heat than others.

However, there’s some good news for people who were born with a low tolerance for spice. It doesn’t imply you’ll never be able to appreciate spicy cuisine because you were born with fewer capsaicin receptors. It’s not a myth: you may regularly raise your spice tolerance by exposing yourself to it. You can physically modify and desensitize your nerve endings by repeatedly exposing your pain receptors to capsaicin, allowing you to eat more spicy food without experiencing as much pain.

Are people born with a spice-hating gene?

Spicy food fans aren’t born with a taste for it. Capsaicin and other spicy food components deplete a neurotransmitter called substance P, which delivers pain signals to the brain, so it’s acquired over time. People in some nations, such as India and Mexico, appear to have a naturally higher tolerance for spicy foods because they’ve been eating them since childhood.

What should you do if you consume too much spicy food?

Try eating some of the items that bind to the capsaicin molecule, such as rice, bread, and dairy. Moreover, keep in mind that when consuming spicy foods, water is not your friend. Drinking water does not assist to combat the effect of spice and spreads the molecules in your mouth, making it more uncomfortable.

When it comes to spicy food, not everyone is up to the challenge. Those who have low tolerances may experience tears in their eyes due to the spiciness of their food. Start with something milder, such as salsa or Thai food, before progressing to more severe meals, as there are 100 to 2,500 SHU in mild food. Hopefully, with the help of our article, you now have in-depth knowledge of the Spice Scale of Mild. 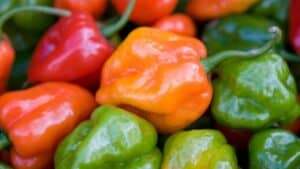 How Much Hotter is a Ghost Pepper Than a Habanero 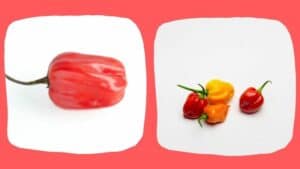