Many people enjoy a little spice in their life, while others seek heat to the extreme. Paqui is known for initiating the One Chip Challenge with the Carolina Reaper pepper back in 2016, but they also have other flavors, including the Haunted Ghost Pepper chips. Ghost peppers alone are fiery hot peppers, but how spicy are the Paqui Ghost Pepper chips?

The Paqui Ghost Pepper chips are super spicy, building the burn with each chip you eat. With each chip, a spicy coating includes cayenne, chipotle, and the infamous ghost pepper. Paqui rates them as “Freakin’ Hot,” while ghost peppers themselves are rated as “fire” on the Scoville Scale.

This article will discuss the Paqui Haunted Ghost Pepper chips, the level of spiciness, and the company behind these blazing snacks.

Many companies claim their chips have high spicy levels, yet most always fall short of expectations. Paqui has a line of chips that range from zesty to spicy to making you sweat after eating only one chip (more on this later). The Haunted Ghost Pepper chips provide that spicy burn, creeping up on you as you reach for more.

Each chip is coated with a mouth full of flavor and spicy peppers in every bag. There is no way to scale how much of a punch each chip contains since each batch is different. The pungency of the peppers depends on the harvest, the weather while growing, and the pepper itself.

Cayenne, chipotle, and ghost peppers are the mouth-kicker combo in the ingredients, but each pepper ranks differently in heat.

How the Heat Is Rated

The Scoville Scale is used to rate peppers and chilis on the level of spiciness they contain. It was invented in 1912 by American pharmacologist Wilbur Scoville. He also developed the method for testing the peppers, called the organoleptic test.

The organoleptic test was initially used to measure pepper heat by choosing a panel of people experienced in tasting hot chilis. During this process, chili peppers were diluted until the panel of taste testers no longer felt any heat. Once they no longer felt the heat, the chili would receive a Scoville Heat Unit (SHU) value.

Today, high-performance liquid chromatography (HPLC) is used to indicate the heat of chili peppers. The peppers are dried, ground, and mixed with a solvent for this process. The mixture is analyzed to determine the concentration of the compound causing the heat.

The results are given in the ASTA severity level and then converted into SHU.

So, let’s see how these three peppers listed in the Haunted Ghost Pepper ingredients stack the heat on the Scoville Scale.

Chipotle is the least spicy of the three, ranking at 2,500 to 8,000 SHUs, as hot as your typical jalapenos pepper. Chipotle peppers are made by smoking fully-ripened red jalapenos. This process provides a delicious smoky flavor with a bit of heat and an underlying sweetness.

Paqui’s Haunted Ghost Pepper chips will challenge your taste buds if jalapenos are too spicy for you.

Cayenne peppers are rated as 30,000 to 50,000 SHUs. These peppers have a bit more of a bite with a medium-hot spiciness, similar to a serrano pepper, making it considerably hotter than the chipotle pepper. Cayenne peppers are green (immature) or red (ripe) chilis widely used to add spiciness to cuisines worldwide, including popular dishes in the southern United States.

The ghost pepper smothers the other two peppers in flames, ranging from 800,000 to 1,041,427 SHUs, and was named the hottest pepper in 2007. Since then, several peppers have surpassed this once-named champ. But don’t be fooled because the ghost pepper still remains super hot, around 7th in the top 10 hottest peppers.

Because ghost peppers pack the heat and flavor, they are often used in hot sauces.

Here is an interesting fact, the Indian Army used ghost peppers to make military-grade smoke bombs, and the local residents used them to keep elephants away by smearing the peppers on fences and walls.

So, again, if you have trouble with the spiciness of a jalapeno or cayenne pepper but still want to try these chips, you’re in for a fiery treat.

Paqui is actually a part of Amplify Snack Brands, a company dedicated to sharing simpler and tastier snacks without all the added preservatives and GMOs. The ingredients in the Paqui chip line are natural, including corn, chilis, and spices. There are no artificial flavors, and these chips are gluten-free.

Between the One Chip Challenge and the regular chip line, Paqui provides natural flavors that will make your taste buds dance with flavor or scream from the fiery heat.

Paqui definitely put its name on the map when it initiated the One Chip Challenge back in 2016. People all over social media were trying the challenge, some not realizing the serious heat they were getting into. This company is still rolling out new chip challenges, with the latest one being the 2021 version of the Carolina Reaper chip.

If you’re thinking of attempting the One Chip Challenge, you may want to read Paqui’s warning label first because the heat from just one chip can be painfully unbearable for those sensitive to spicy foods.

Paqui may be well-known for the #OneChipChallenge on social media, but they have other flavors to satisfy those who aren’t seeking heat to the extreme.

The Hot to Not Lineup

Listed below are the other chips from Paqui, and they are rated as Not Hot to Freakin’ Hot.

With the primary heat coming from the ghost pepper used in Paqui’s Haunted Ghost Pepper chips, the spiciness of these chips may be flaming hot or unbearable to those who are not used to consuming spicy foods or may be sensitive. However, Paqui has other delicious flavors that may satisfy your low-heat-loving taste buds.

If you enjoy indulging in fiery flavors, perhaps you should try them. They are not made from the hottest pepper, but many consumers say it may be the hottest chip they have ever tried. So, grab a bag and put your taste to the test. 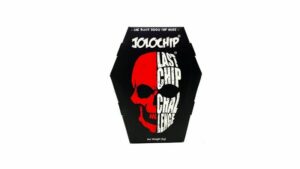 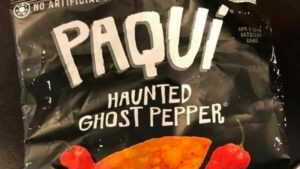 Why Are Paqui Chips So Expensive?

What Is The Scoville Scale Of The Paqui Haunted Ghost Pepper Chip?