Any lover knows that peppers are a terrific way to add a kick to any dish. There are a plethora of peppers to choose from, each with a different level and both fresh and dried options. But are fresh peppers spicier than dried peppers?

In the rest of this article, I will go into more depth as to why in certain cases, dried peppers are spicier than fresh peppers and vice versa. I will also discuss why spicy peppers sometimes taste less spicy than normal and how cooking affects a pepper’s .

Capsaicin is the chemical in all peppers that makes them spicy. As a pepper grows and ripens, the capsaicin concentration increases. Then, the pepper decreases in size during the drying process. In turn, smaller peppers are generally spicier than larger peppers.

Dried peppers have higher capsaicin concentrations than their fresh counterparts for a few reasons, including that they are left to ripen longer than fresh peppers. It’s also worth noting that capsaicin is oil-based rather than water-based.

Also, capsaicin is oil-based rather than water-based. It does not dissipate during the drying process as water-based substances do. The peppers also shrink while drying, so the capsaicin concentration increases.

While dried peppers have a higher concentration of capsaicin, fresh peppers sometimes taste spicier than their dried counterparts. This is because the water in fresh peppers moves the capsaicin around in your mouth, making the pepper seem spicier.

The Water Content in Fresh Peppers Disperses Capsaicin in the Mouth

When the water disperses the pepper’s capsaicin within your mouth, you feel the everywhere, rather than just on your tongue and throat like you do with dried peppers. Because you feel the throughout your mouth, the pepper tastes spicier.

When cooking, fresh peppers are great when you want to add that little kick without overpowering the whole meal. This is part of the reason fresh peppers are especially great for cooking. It takes more dried peppers to achieve the same effect as fresh peppers in a recipe.

Sometimes peppers, both fresh and dried, taste less spicy than they should. This can happen for a variety of reasons, from the type of pepper to being over or under-watered to the climate and geographic region in which they were grown.

Let’s go into a little more depth as to why your store-bought or homegrown peppers are less spicy than they should be.

The Type of Pepper Is Less Spicy

The Scoville Scale determines and describes how spicy a pepper is. Measured in Scoville Heat Units (SHU), the scale ranges from mild to extremely hot.

Sometimes you may buy or grow a pepper with too low of heat/spice that you want. It’s an easy enough fix if this happens; all you need to do is buy or grow a different type of pepper, one with the SHU you want.

The Pepper Was Over-Watered or Under-Watered

Peppers are very temperamental when it comes to watering. It is very easy to over and/or under-water peppers, depending on your location. Studies in climates like Mexico, Spain, and Thailand found that peppers became spicier with less watering (thus increasing water stress).

On the other hand, a study in California found the opposite. When there was water stress, peppers became milder.

If you grow your own peppers, do not induce water stress until after the fruit sets. This ensures that the flowers are properly pollinated and that the peppers can grow.

The Pepper Was Grown in Colder Climates

Interestingly, peppers also tend to be spicier when they are grown in warmer climates compared to colder climates. Maybe this is why many places where spicy peppers are popular have warm climates.

Specifically, it has been found that warm nights contribute to peppers having high capsaicin content.

In the wild, peppers also become spicier when eaten by some insects and fungi. They slow bacterial growth, allowing more capsaicin to form in the pepper.

How Cooking Affects How Spicy a Pepper Is

So far, I’ve only talked about how both dried and fresh peppers could be considered spicier than the other when uncooked. But does cooking a dried pepper changes its level? What about cooked fresh peppers?

Let’s talk about how cooking affects the level of fresh and dried peppers.

In general, both dried and fresh peppers have the same level when used in cooking. Also, the level of the pepper should not be different from when you eat the same pepper raw or uncooked.

Since the pepper’s level does not change when cooked, choosing whether or not to use the fresh or dried version of the pepper depends on how you want your cooked dish to turn out.

If you want a smoky taste, go for the dried pepper instead of fresh. However, when replacing fresh pepper with dried, you should use about two whole dried peppers per one chopped fresh pepper.

Fresh Peppers Are Spicier If Cooked With Water

There is at least one instance in cooking where the fresh pepper is spicier than its dried counterpart. When the cooked dish has added moisture, like water, fresh peppers are spicier than dried peppers.

This happens because the moisture binds with the capsaicin in the pepper, increasing the level in the same process that a raw fresh pepper is spicier than an uncooked dried pepper.

You can argue that dried or fresh peppers are spicier than the other. Technically, dried peppers have a higher concentration of capsaicin than their fresh counterparts. On the other hand, the extra water content in fresh peppers spreads the capsaicin throughout the entire mouth, making it feel spicier.

Sometimes peppers taste less spicy than they should, depending on the pepper itself, how much water the pepper received during growth, the climate the pepper was grown in, and more.

Both fresh and dried peppers have the same level in cooked dishes, except when cooked in moisture like water. 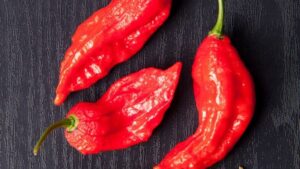 How To Store Your Ghost Peppers Without Losing Their Heat 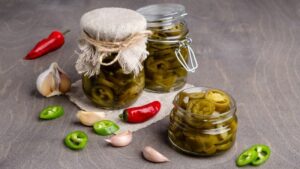 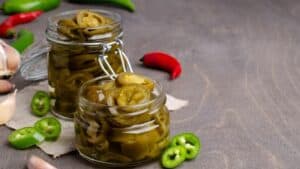 Why Are Pickled Jalapenos More Spicy