Kashmiri chili powder and paprika both impart taste, color, and heat to Indian foods. Today, I still struggle to tell the two spices apart due to their color. You may be wondering whether there is a substantial difference between paprika and Kashmiri chili powder.

Read on to learn the differences between paprika and Kashmiri chili powder. I will highlight their ingredients, how they’re made, and how to use them.

Are Kashmiri Chili Powder and Paprika the Same?

The table below summarizes the differences between Kashmiri chili powder and paprika.

Paprika: What Is It, and How Is It Made?

Paprika is a spice traditionally made by grounding bell peppers (Capsicum Annuum) and red peppers. It’s also made from chili peppers in the Longum group, but those used to make Paprika are milder and have less flesh.

Although it’s most commonly a product of bell peppers, Paprika can also be made from dried cayenne peppers, Aleppo peppers, and sweet peppers, among others. This red spice varies in heat levels, color, and taste depending on the type of peppers used to make it.

Paprika is native to Central Mexico. It moved to the rest of the world in the 16th century to feature prominently in Hungarian cuisine, where it is a staple spice to this day.

Check out this YouTube video to learn how to make Paprika powder at home.

How To Use Paprika

Paprika adds distinctive color to what is often a sea of muted dishes. You can use it as a seasoning in the following:

Can I Store Paprika in the Freezer?

Seeing as it has so many great uses, you’re probably feeling inclined to keep an abundance of paprika on hand! Luckily, the spice is easy to store.

Kashmiri Chili: What Is It, and How Is It Made?

Kashmiri chili is a red pepper that’s grown in Kashmir, India. It is used primarily for its flavor and color rather than its heat. It’s an essential ingredient used as a powder or dried in the Indian subcontinent.

Kashmiri chili is a welcome addition to dishes that need a burst of flavor and color. Its powder form (Kashmiri chili powder) is made by grinding sun-dried red peppers. Kashmiri red peppers are long and slender, boasting a unique balance of sweetness and heat.

How To Use Kashmiri Chili Powder

Kashmiri chili is a favorite of most fans of Indian cuisine; in fact, it’s a standard ingredient in tandoori chicken. It adds a mildly spicy taste similar to that of tomato sauces and a burst of flavor and color when used in macaroni and cheese.

Ways You Can Use Kashmiri Chili Powder

Here are a few ways you can utilize Kashmiri chili powder:

If you’re looking for some of this unique spice, check out this Rani Kashmiri Chili Powder on Amazon.com. It’s sure to add a striking color and mild flavor to any dish!

Kashmiri chili powder is mildly hot. Dishes made with the spice have small amounts of chili heat but are nowhere near as spicy as those made with traditional chili powder.

You can use both spices to add a classic red color and taste to soups, curries, and stews. 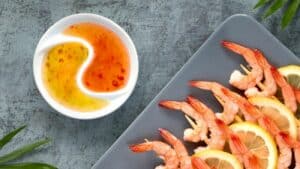 What is the Difference Between Spicy and Zesty? 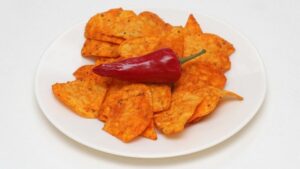 How Long Do the Effects of the Spicy Chip Last? 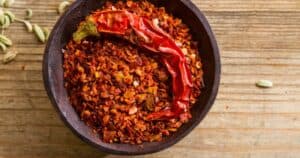 Are Red Pepper Flakes The Same As Crushed Chillies?