Hot and sour foods are a favorite worldwide. Loved by critics and enthusiasts alike, these foods can really bring in the heat! However, if you’ve ever tried extra spicy food, you’ll know that it isn’t uncommon for the food to be followed by a case of never-ending hiccups.

The high amounts of capsaicin in hot food and the acidic properties of sour foods can give you hiccups because they can irritate the nerves surrounding the esophagus and the diaphragm. However, this mechanism still requires further studies.

In this article, I will talk more about how hot and sour foods can cause hiccups, other factors that may be involved, and what you should do to deal with them.

Scientists don’t understand hiccups very well at the moment. We don’t precisely know why they happen, but there are a few solid theories.

The primary mechanism by which hot and sour foods cause hiccups is the irritation of either the nerves surrounding the diaphragm or the diaphragm itself.

The diaphragm is a dome-shaped muscle in your body. It is located right at the base of your chest, near all the other important organs, such as the lungs and the stomach.

The purpose of this muscle is to allow you to inhale and exhale air. It does so by contracting and relaxing. When it contracts, air from the outside is drawn in, and when it relaxes, the air is pushed out.

Let’s take a look at how hot and sour foods lead to the said irritation:

The Capsaicin in Hot and Spicy Foods

Hot foods derive their characteristic spiciness from a compound called capsaicin. This compound is found in different quantities in spicy food or ingredients like hot peppers. Generally speaking, the more capsaicin something has, the spicier it will be.

Capsaicin generates the feeling of spice by binding to certain pain receptors located in the mouth and the digestive tract. The particular receptor that capsaicin binds to is called the TRPV1 receptor. This pain receptor can also be found all over the body.

Fun fact: Humans, along with tree shrews, are the only species known to enjoy spicy food. This is because in humans (at least), the activation of these pain receptors is met with the release of endorphins or feel-good chemicals. As a result, people continue to eat spicy foods despite the adverse effects.

Irritation of the Esophagus

The esophagus is a muscular tube that runs from the back of your throat down into your stomach. Its purpose is to allow the transfer of food from the mouth to the stomach.

The presence of capsaicin receptors in the esophagus makes it sensitive to spicy foods, resulting in discomfort or even pain in the area.

This is a problem since two major nerves that carry influence over the contractions of the diaphragm are located very close to the esophagus. These nerves are the phrenic and the vagus nerve.

Consumption of hot, spicy, acidic, or even cold food can irritate the esophagus, which in turn can irritate the phrenic and vagus nerves. This irritation can then trigger involuntary contractions in your diaphragm resulting in hiccups.

The Acidic Nature of Sour Food

Sour food is acidic. In fact, the acidic nature of sour foods is what gives them their distinct flavor in the first place. If you’ve enjoyed something very sour recently, you might remember the slight sizzling, acidic feeling associated with sour food.

However, acidic compounds can also cause irritation along your digestive tract. Excessive consumption of sour foods could be linked to hiccups.

How Hot and Sour Foods Can Indirectly Cause Hiccups

A Flare-Up of Gastrointestinal Disorders

Hot and sour food doesn’t have to affect the diaphragm or the nerves around it directly to result in hiccups.

For people with pre-existing underlying gastrointestinal conditions such as ulcers or heartburn, the consumption of hot and spicy foods can result in a flare-up of symptoms. People with gastrointestinal disorders tend to experience hiccups more frequently than otherwise healthy people.

Beverages are a must with hot and sour food! They complement the spice so well and help the food go down easier. Think about it, when was the last time you had something spicy without having an alcoholic beverage or a soft drink to go along with it?

However, soft drinks, as you might know, are carbonated and tend to release gas as they go down. This causes an increase in internal air pressure and shows itself in the form of feeling the need to burp right after chugging down the drink.

The increase in air pressure within your digestive tract can lead to bloating. Bloating has been linked to an increase in the likelihood of a case of hiccups.

This is somewhat similar to the last point. If you eat too much, it might not necessarily be the fact that the food you’re eating is hot, spicy, or sour that’s causing your hiccups.

Overeating increases stomach size as it expands to keep up with the increasing amount of incoming food. This temporary increase in size can cause discomfort and trigger surrounding nerves.

In addition, spicy foods take longer to digest and stay in your stomach longer. The stomach stays distended, pressing against the diaphragm. Pressure on the diaphragm may result in slowed or irregular contractions and, consequently, hiccups.

How To Deal With Hiccups

Hiccups can be frustrating to deal with. Although not guaranteed to work every time, there are some popular remedies. There is little scientific evidence supporting these methods, though.

Or, you can just try and wait for the hiccups to pass. They will pass on their own, usually in as little as a few minutes, although it may take up to an hour for some people. It is also not uncommon for them to last beyond that time frame either. If hiccups persist after 48 hours, you should consider getting in touch with a doctor.

Hot and sour foods have capsaicin and can be acidic, which can cause hiccups by irritating the nerves surrounding the diaphragm or the diaphragm itself. Sometimes, the excessive eating or drinking that comes along with eating spicy food may be the culprit.

Don’t let a bout of hiccups ruin the experience for you, though. Although frustrating to deal with, there are some remedies you can try, or you can just wait them out. They will likely pass away on their own soon. Consult a doctor if your hiccups don’t stop within 48 hours or if the condition gets too painful.

Why Do Spicy Chips Make You Cough? 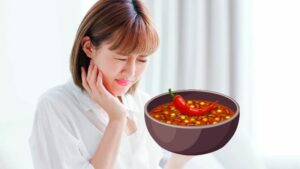 Can You Eat Spicy Food After a Tooth Extraction? 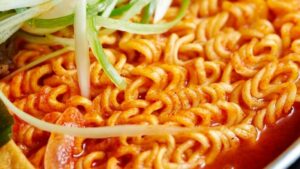 Are Super Spicy Noodles Bad for You? (Surprise Answered)