Growing bell peppers can be a challenge for first-timers. The very first time I saw flowers, there was a relief. As the plants started bearing fruits, I wanted to know when to pick red bell peppers.

I feel fulfilled seeing my bell peppers thrive and harvesting many fruits. So, I understand that you do not want to pick your bell peppers too early or turn them overripe.

Red bell peppers are usually ready for harvest around 14 to 17 days after growing the fruit. You can also pick them once they turn red, are large enough, and are firm.

What are the Signs That Your Red Bell Peppers are Ready for Harvest?

These peppers grow during the summer months with temperatures of 65° to 80°F. The plants can produce up to 10 peppers with proper care.

Unlike other peppers that become spicier when they ripen, red bell peppers get sweeter. Since they are the most mature flavor, these peppers take the longest to hit that stage.

I recommend picking bell peppers when they start turning to the color your want. Since you want red bell peppers, wait until they are fully mature and turn red. You can pick it up when you see red tinges on the skin, or the whole fruit is red.

Even if your bell peppers are not yet wholly red, like they still have green and yellow tinges, you can already collect them. The peppers will continue to ripen and turn red on your kitchen counter. However, do not leave them there too long because they will become orange- or black-looking peppers.

Besides the color, you also need to consider the firmness. Give a pepper a light squeeze and determine if it feels soft or not. If yes, wait a little more time to let it ripen. However, if the pepper feels firm, then pick it.

How to Harvest Red Bell Peppers

Assuming that your bell peppers are ripe, mature enough, already turned red, and the skin is firm, your next task is to harvest them properly.

Using a pair of sharp shears or scissors is best recommended when cutting off at the stem. Some people pull the peppers out of the plants. However, this method can cause damage to the plants. Do not forget to wear gloves so the pepper juices will not get on your skin.

Ideally, harvest peppers in the morning after the dew had dried but before the sunlight becomes too bright. The bell peppers are at their juiciest and the crispiest at this period.

What to Do with Freshly Picked Red Bell Peppers

Congratulations! You have grown your bell peppers healthily and harvested them with attractive appearance, crispness, and juiciness.

But after harvesting, what can you do with red bell peppers?

These peppers have a sweet, mild flavor and attractive red color, making them perfect for making tasty snacks. You can eat the pepper or use it as a key ingredient in making a dip.

I love stuffed red bell peppers! So, every time I get some fresh red bell peppers on my counter, I make a delicious and healthy dish. I stuff them with rice, veggies, and meat. Then, I roast them for an aromatic, healthy, and mouthwatering lunch. I also make stir-fries and fajitas using bell peppers.

How to Store Red Bell Peppers the Right Way

Before storing your red bell peppers, choose the right ones for the batch, especially if you plan for long-term storage. Choose those peppers with shiny skin and without traces of bruising or wrinkling.

Stay away from moldy peppers and only stick to fresh ones. If you see unsightly blemishes or dark spots on the peppers, look for another. The peppers’ firmness is critical as it indicates crispness.

You also need to determine where you should store your bell peppers. But before that, know how long you want to keep them. For example, if you’re going to keep peppers for long-term use, opt for the freezing, dehydrating, and canning methods to keep them fresh for a long time.

On the other hand, if you want to use peppers immediately or within 1 to 2 weeks, choose other storage techniques.

Short-term storage is the only way to store your red bell peppers whole. You can place peppers in the fridge. They will not deteriorate faster, unlike when cut up.

If you prefer storing chopped or cut red bell peppers, you can also keep them in the fridge. But be sure to toss them out after 3 days. Although they can last up to 2 weeks, they will eventually show signs of aging, including a moldy or slimy exterior.

Storing in the Fridge

Place red bell peppers in the crisper. Then, store them in a fridge free of moisture. If the peppers are damp, you can wipe them using a paper towel. Alternatively, you can use a grocery bag to store them longer.

These bags are often meshed with plenty of holes, allowing enough airflow. Remember that adequate airflow is critical for maintaining the peppers’ freshness and crispness. If you have no mesh bag, you can poke a plastic bag with holes.

Storing in the Freezer

Freezing allows more prolonged storage of red bell peppers without damaging the texture and taste too much.

First, place the cut red bell peppers on a cookie sheet on a single layer. Do not let other peppers overlap one another for even freezing. You do not need to cover the peppers. Make sure only to freeze them for an hour.

Next, place peppers in freezer bags or an airtight container, ensuring no air is present. You can also use a vacuum cleaner to remove as much air from the freezer bags if you have one.

You can store your canned red bell peppers for 3 to 5 years. 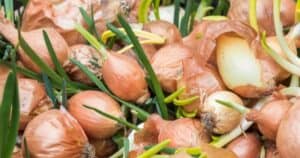 When to Pick Onions After Planting (Best Time to pick) 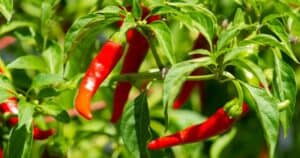 When To Pick Cayenne Peppers? (Best Time To Pick) 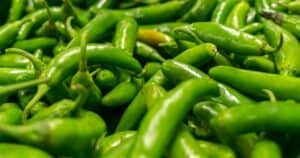 When to Pick Serrano Peppers? (Best Time to Pick)