Even though ghost peppers are super hot, they do also possess a fruity flavor that enriches their overall taste. Humans perceive the hotness of ghost peppers because of the interaction between their mouth receptors and the phytochemicals in peppers. However, could we say the same for animals?

Humans appear to be the only ones capable of consciously eating ghost peppers despite the and even enjoying them. However, how safe would it be if an animal was to eat a ghost pepper? This article will tell you what animals eat ghost peppers and whether it is harmful to them. Let’s get started!

What Animals Eat Ghost Peppers Without Feeling the Burn, and Why?

Most non-mammals are the only animals that eat ghost peppers without feeling the burn. The reason is that they lack the receptors that bind Capsaicin (the phytochemical responsible for pepper hotness). As a result, their brains cannot generate the feelings of danger associated with perceiving Capsaicin.

Eating ghost peppers is not particularly dangerous for the animals that can eat them. Essentially, most ghost pepper eating animals like birds do not intentionally eat them because they like them. Birds are generally more interested in the ghost pepper seeds than their flesh.

According to popular scientific explanations, it is possibly an evolutionary response to the propagation of plant life.

Most animals reported to eat ghost peppers do not precisely eat their fruit because the Capsaicin acts as a repellent. Such animals only eat the plant parts like stem, leaves and roots and, in the process, destroy the plant’s chances of flourishing.

Even though humans evolved as the only species that intentionally enjoy eating peppers, a recent scientific discovery proves that there is another mammal tough enough to seek out ghost peppers and eat them.

How Humans Respond to Ghost Peppers

Humans respond to ghost peppers the same way they react to other peppers and spicy foods. They are the first creatures to eat peppers and spicy foods consciously. The human mouth has receptors like TRPV1(transient receptor potential vanilloid subfamily, member 1) that bind to the various phytochemicals in peppers to send the danger signal to the brain.

The brain responds by reacting to the phytochemicals, whether Capsaicin or piperine, to generate heat, sweating and other usual human responses to pepper and spicy foods. However, psychological research also reveals that some human personality types have a natural affinity for pepper because it creates a rush of adrenaline.

In addition, the brain releases endorphins, a feel-good hormone, to counteract the hotness from eating peppers, thus causing people to continue wanting to eat more peppers.

Tree shrews are small mammals native to the forests in south-east Asia, especially in China. According to the National Geographic Magazine, Tree Shrews are the only mammals besides humans who intentionally seek spicy food and peppers to consume.

Additionally, some Chinese research reveals that Tree Shrews developed the endurance for ghost peppers and other peppers due to a genetic mutation in the TRPV1 receptor responsible for the perception of Capsaicin. As a result, Tree Shrews can eat many ghost peppers and other peppers without feeling the burn but instead enjoy foods containing Capsaicin.

Science believes that the mutation is critical for giving Tree Shrews more adaptive features in the wild by increasing their food options.

How Birds Respond to Ghost Peppers

Birds are the most common animals for eating ghost peppers and other peppers. Essentially, birds are the reason farmers worry about their pepper plants. However, it is a blessing in disguise.

Birds do not perceive the Capsaicin and other phytochemicals responsible for spiciness. As a result, they can eat lots of peppers. However, birds do not eat ghost peppers intentionally because they are attracted to the pepper seeds instead of the pepper flesh. Some people argue that birds can eat pepper because they do not have taste buds.

Below is a comparison table for animals that eat ghost peppers.

How Does Animal Consumption of Ghost Peppers Affect Humans?

When animals like birds consume ghost peppers, human activity is also affected. The birds serve as agents of pollination. According to popular opinion, peppers rely on birds for their propagation and pollination as a form of evolutionary adaptation. As a result, birds are not affected by Capsaicin.

Is It Safe For Me To Feed My Chickens Ghost Peppers?

Some people feed their chickens with ghost peppers and other peppers as a deworming agent, especially in rural regions. Chickens can neither taste nor detect Capsaicin, the phytochemical responsible for the spiciness or hotness of ghost peppers and most peppers.

As a result, chickens can eat ghost peppers without feeling harmed. However, your discretion is advised before feeding ghost peppers to your chickens.

What Is the Easiest Way To Protect Your Pepper Plants From Being Eaten by Animals?

Even though most animals do not eat the pepper fruits, they can at least eat the plant (leaves, stems and roots). Eating the pepper plant will undoubtedly affect their growth, causing them to mature late and yield a limited harvest. You can cover the young pepper plants with a cloche and remove them when the peppers are grown enough.

What Animals Are Immune to Capsaicin?

Most animals are vulnerable to capsaicin. However, a significant deterrent from eating capsaicin-containing fruits begins with their pungent odor and taste. Capsaicin is toxic to bees and other insects, while most mammals avoid the chemical because of its harsh taste. However, birds cannot perceive Capsaicin and are the significant consumers of pepper fruits.

On a closer analysis, all other animals that appear to eat ghost peppers only eat the plant parts like the stem, leaves, roots, etc. and not the fruit. Hopefully, this article helps you know that some animals can eat ghost peppers without feeling any ! 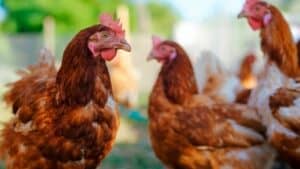 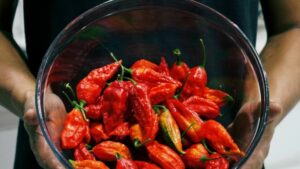