An inexpensive way of boosting chicken health is spicing up their diet. Among the sought-after spices for chicken is red pepper since some people believe it increases egg production. So, should you purchase loads of red pepper flakes for your chickens?

Red pepper flakes are good for chickens. Red pepper contains capsaicin, a compound that disrupts bacteria and worm colonies. The anti-microbial and anti-viral properties of capsaicin may help your chickens fight bacterial infections and worm infestation.

So, let’s talk more about the benefits of adding red pepper flakes into your chickens’ diet. I’ll teach you the science behind how red pepper flakes can keep your flock healthy and discuss some of the misconceptions about what pepper can do for poultry.

Why Should You Feed Red Pepper Flakes to Chickens?

You should feed red pepper flakes to chickens to boost immunity and fight bacterial infections and parasites. The capsaicin in red pepper creates an unconducive environment for bacteria, limiting colony growth. A mixture of red pepper, garlic, and vinegar detaches worms from chickens.

Capsaicin, the active constituent in red pepper, has antimicrobial and antiviral characteristics. These properties may help chickens combat bacterial infections.

Evidence of direct bacteria inactivation by capsaicin is still lacking. However, some studies suggest capsaicin can inhibit biofilm formation, limiting the growth of bacteria colonies. So, while red peppers don’t necessarily kill the bacteria, they do make your chickens’ stomachs less comfy for those harmful bacteria.

Besides bacteria, capsaicin has shown activity against worms in chickens’ digestive systems. This method of worm removal is effective when you mix red pepper with other natural dewormers like garlic and vinegar.

A 2012 study on the effect of red pepper on egg yolk found that dietary inclusion of red pepper does not affect the egg-laying performance of chickens.

So, although peppers won’t increase the size or amount of eggs your chickens produce, other factors play a role in laying. Egg production depends on several factors, including:

The egg yolk score is a vital parameter for gauging the quality of eggs in the consumer market. Consumers primarily seek eggs with yellow to red yolks, and for a good reason. A publication in the Journal of Food Science asserts that yolks with darker colors (red/orange) tend to have more omega-3 fatty acids than lighter-colored counterparts.

Fortunately, you can enrich eggs by feeding chickens compounds called carotenoids, and when it comes to carotenoids, red pepper flakes have tons of them.

The yellow pigments in red pepper outnumber the red pigments. So, red pepper flakes for chickens will likely intensify the yellow color of egg yolks. A study evaluating the effect of red pepper (Capsicum frutescens) on egg yolks backs up this claim.

According to the study, chickens that ate a diet supplemented with 0.3 ppm red pepper laid eggs with improved yolk scores. Interestingly, egg weight also increased when chickens fed on the red pepper.

Red pepper may help improve blood circulation in chickens, but that won’t be enough to prevent frostbite.

The frostbite issue in chickens has a lot to do with the coop’s state. Frostbite is common in poorly ventilated enclosures that retain moisture. Water condenses and freezes on your flock’s wattles and combs when temperatures plummet. You can avoid this problem by ventilating the coop.

TRPV1 (vanilloid receptor) is a protein that mediates the detection of toxic stimuli in humans, animals, and birds. This vanilloid receptor binds to capsaicinoids in foods, sending heat and temperature signals to the brain. That is why humans and many other animals feel hot after eating capsaicin-rich foods like red pepper.

Studies have shown that chickens’ TRPV1 is capsaicin insensitive, which means chickens can feed on red pepper flakes without experiencing the heat.

Since other animals such as squirrels, opossums, and rabbits taste spices like pepper, you can safely use red pepper flakes to deter pests from eating chicken feed. 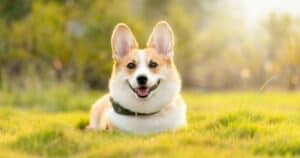 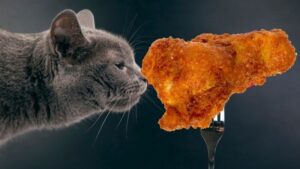 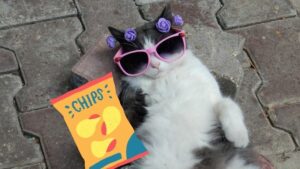 Why Does Your Cat Like To Eat Spicy Chips?