When it comes to Vietnamese food, one question always seems to come up: is it spicy?

No, Vietnamese food is not typically spicy. While some dishes have a bit of heat, most meals are mild and flavorful. But Vietnamese also serve with Sriracha Sauce or chili peppers sauce (Nuoc Cham) on the side for those who want to add a little spice.

Vietnamese cuisine is all about fresh, healthy ingredients. Dishes are often light and fragrant, with plenty of vegetables and herbs. Seafood is also popular, as Vietnam is home to a long coastline.

This article will explore the flavors and ingredients that make up Vietnamese cuisine. We’ll also give you some spiciest food to try in Vietnam.

Spicy, flavorful, and intensely satisfying, Bun Bo Hue is a noodle soup from the city of Hue in central Vietnam. It’s made with beef and pork, and the broth is usually spicy. The soup is prepared with lemongrass, birds-eye chile, basil, yellow onions, salt, sugar, shrimp paste, shallot, and lime wedges and can garnish with banana flower or chili oil.

Bun Bo Hue can be found for breakfast or lunch and make a delicious dinner.

Bo Kho is a beef stew that’s often served with rice or French bread. It’s made with beef, carrots, lemongrass, ginger, star anise, fish sauce, and chili peppers. Bo Kho is hearty and filling and has a bit of spice from the chili peppers.

Bun Cha may be the most famous dish to come out of Hanoi, and for a good reason. The traditional Vietnamese dish is made with seasoned pork patties, and caramelized pork belly slices served in a broth alongside rice noodles, fresh vegetables, and herbs. These caramelized pork meatballs are delicious and perfect for relieving stress after a long day.

Bun Cha is a spicy dish, but the sweetness of the caramelized pork offsets the heat.

You can’t make a list without Pho, Vietnam’s national dish. Pho is a noodle soup made with beef or chicken and served with rice noodles, fresh herbs, and bean sprouts. The soup is usually mild, but you can add chili oil or Sriracha Sauce to make it spicier.

Like Pad Thai, Pho has spread to every corner of the globe. You can enjoy Pho from mild to spicy, and there’s sure to be a perfect bowl.

Goi Du du is a papaya salad that’s popular in Vietnam. The salad is made with shredded green papaya, carrots, chili peppers, fish sauce, and lime juice. It’s a refreshing, healthy dish that has a bit of spice from the chili peppers.

The shrimp is often made spicy. These chewy, transparent shrimp dumplings are a delicious treat that can be made spicy. Aside from shrimp, these dumplings can be filled with pork. The pork is usually marinated in a special sauce containing various spices, including chili pepper flakes and garlic.

The dumplings are then steamed or fried and served with a dipping sauce. The combination of the flavorful filling and the crispy wrapper makes for a delicious and crave-worthy dish.

Vietnamese cuisine is known for its use of fresh herbs and spices. Some of the most popular spices in Vietnamese cooking include chili peppers, lemongrass, ginger, garlic, star anise, and cinnamon. These spices add flavor and heat to dishes like Bun Bo Hue and Pho.

Nuoc Cham is a famous dipping sauce in Vietnam that’s made with fish sauce, sugar, lime juice, chili peppers, and garlic. The sauce is salty, sweet, tangy, and spicy all at the same time. It’s the perfect accompaniment to Vietnamese dishes.

While it originates from Chonburi, Thailand, Sriracha sauce has become a popular condiment in Vietnam. The sauce is made with chili peppers, garlic, sugar, and vinegar. It’s spicy, tangy, and slightly sweet. Sriracha sauce is often used as a dipping sauce or to add flavor to Pho.

Chili oil is a popular ingredient in Vietnamese cuisine. It adds flavor and heat to dishes like Bun Bo Hue and Pho. The oil is made with chili peppers, garlic, and sometimes lemongrass.

Lemongrass is a common ingredient in Vietnamese cuisine. It’s a fragrant herb that has a lemon-like flavor. Lemongrass adds flavor to dishes like soup, curry, and stir-fry. It’s also used to make tea and lemongrass essential oil.

The thing you should know

Is Vietnamese Spicier Than Thai Food?

The short answer is no; Vietnamese food typically milder than Thai food. While there are some spicy dishes, most Vietnamese cuisine is flavored with fresh herbs and spices, rather than relying solely on chili peppers for heat.

Those two countries have long shared traditional cultures, so Vietnamese and Thai people usually enjoy both cuisines without thinking about which one is spicier. They evaluate by their taste.

Is Vietnamese Spicier Than Filipino Food?

In general, Vietnamese food is spicier than Filipino food. However, there are some exceptions. It all depends on the individual dish. For example, if you compare Bun Bo Hue (a Vietnamese noodle soup) to Bicol Express (a Filipino dish), the Bicol Express will be spicier.

What Makes Vietnamese Food So Good?

Whether you like your food spicy or not, Vietnamese cuisine has something for everyone. The use of fresh herbs and spices, combined with the diversity of influences, make Vietnamese food some of the best in the world. So next time you’re looking for a delicious and crave-worthy meal, give Vietnamese cuisine a try. Bon appetit! 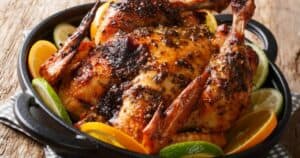 Is Cuban Food Spicy? 8 Dishes to Try for Spicy Lover

11 Mouthwatering Spicy Malaysian Dishes You Have To Try 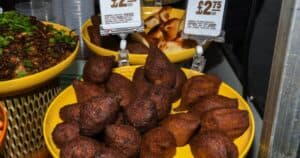