Pepperoni is a bright red American variation of spicy salami (cured sausage dried by air exposure) made from pork or beef and seasoned with paprika or chili. This article will tell you everything you need to know about pepperoni, including where it comes from, how spicy it should be, and when to use it.

Pepperoni is supposed to be spicy, it is a pork and beef sausage seasoned with pepper. Cayenne pepper has the most concentrated flavor of spice, hence giving pepperoni its characteristic spiciness. This seasoning is responsible for the spiciness of pepperoni.

Although Italian butchers and pizzerias invented pepperoni, it was first mentioned in New York City in 1919. In the ancient Roman empire, curing meat was used as a way to keep it fresh without refrigeration. Read on to learn more about your pepperoni!

What Causes Pepperoni to Be Spicy?

Paprika is the primary spice that is used to make pepperoni, and it is also what gives pepperoni its bright red color. However, paprika is not what makes pepperoni spicy.

Cayenne pepper, on the other hand, is the spice that contributes the most concentrated flavor to pepperoni and is responsible for its characteristic spiciness. Pepperoni is meant to be spicy, so it gives the dish a sharp bite and a sizzling heat.

Some pepperoni varieties use less cayenne pepper in order to make the dish milder. Cayenne pepper is a type of capsicum annuum, which is a species of the plant genus capsicum.

It is a fiery chili pepper that is used to flavor foods like pepperoni. Even though it is related to bell peppers and jalapenos, it is hotter.

Cayenne pepper is used in the preparation of pepperoni because of its spiciness, nutritional benefits, and sweet aroma.

The hot flavor comes from the pepper’s active ingredient, capsaicin, which causes a burning sensation in the mucous membrane and tricks the body into believing it is experiencing a real burn.

Spices and Their Effect On Pepperoni

A variety of spices are used in the preparation of pepperoni, each with its own distinct flavor and effect; the table below lists some of the spices used in making pepperoni, as well as their effects on the food.

How to Make Your Own Pepperoni

Pepperoni is made in a long but simple process. This tasty, well-flavored fermented sausage is worth the time and effort, despite the fact that it may be expensive and physically demanding. In five easy steps, you can make your own pepperoni at home!

Step 1: Select and Slice the Meat

Picking the right kind of meat is essential when making pepperoni. For instance, in pork, certain cuts, such as the shoulder, the back, and the belly, are preferred over others.

Both the beef and the pork are cut into cubes and placed in a bowl without the fat being removed. The ratio of pork to beef varies depending on personal preferences.

Step 2: Mix Your Spices Together In A Bowl

The amount of ingredients you’ll need is determined by how much meat you want to cook. Next, place all of your ingredients in a bowl and stir them with a fork to combine them and break up any lumps that may have formed.

Step 3: Place The Meat In the Freezer.

Now that the meat has been cut very finely, you need to put it in the refrigerator for about an hour so that it can firm up before grinding it.

After this step, the clumps of meat are each smoothed out individually before being combined in a single bowl.

Step 4: Combine the Spices and Meat

After the pork meat and beef have been ground separately, the spice mixture is poured over the ground meat, and the pork and beef are mixed together while the mixture is being thoroughly massaged into the meat.

The following day, remove the frozen mixture from the refrigerator, unwrap it, and slice it into the desired shape and size. Your desired pepperoni is now ready for use, although some individuals may prefer to wait a while for the pepperoni to warm up.

With the exception of cheese, the most popular pizza topping in the United States is pepperoni. It is also the most widely available frozen pizza variety.

How Can I Eat My Pepperoni Besides Putting It On Pizza?

Pepperoni isn’t just for pizza; you can add your spicy pepperoni on cheese boards, stuff it in your mushroom, and add it into a salad and even your burger. Don’t limit this delicious ingredient to just pizzas, or you’ll be missing out on a lot!

Although salami and pepperoni appear to have the same flavor, pepperoni is spicier. Pepperonis appear to be slightly smoky as well, whereas salamis do not.

Halal pepperoni always consists of beef, but with the addition of either turkey or chicken. While some argue that it should not be called a pepperoni because it lacks pork, which is a key ingredient in every pepperoni, others disagree.

Pepperoni is a delicious meal topping. It has a wide range of applications – you can never go wrong with it. Consuming too much pepperoni is unhealthy because it increases the risk of diabetes and cholesterol. The spiciness in this topping makes it all the more desirable. Enjoy your pepperonis in your preferred meal today! 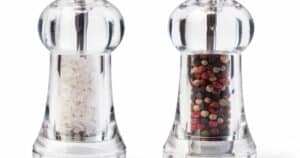 Can You Put Red Pepper Flakes In A Pepper Grinder? 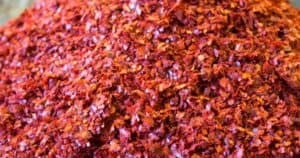 Are Red Peppers Flakes The Same As Cayenne Pepper? 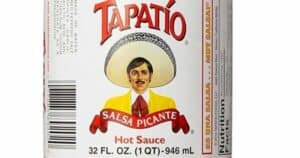 How Spicy Is Tapatio?