It may be difficult to tell the difference between cayenne peppers and red pepper flakes since they are often used in seasonings. Once you have experienced the incredible difference they make, you will always want to have them on hand to add to your meals.

You can always find a few fiery spices on a well-stocked spice rack. Two of the most common are crushed cayenne pepper and red pepper flakes. Both may be a nice taste boost, depending on what you are having for dinner.

Considering that they are both used as a condiment, many may think they are the same. So today, we will compare and contrast these two popular seasonings: red pepper flakes vs. cayenne pepper.

Commonly used to add heat to food, red pepper flakes and cayenne pepper are from the same species of pepper. Both spices may be found in various cuisines, from Asian to Mexican to Italian.

However, because of their minor differences, chefs use these two spices in various ways. The primary distinction between cayenne pepper and red pepper flakes is their hotness.

Cayenne pepper is made by grinding the dried peppercorns into a fine powder. This bright red spice is excellent for adding flavor and heat without changing the texture of whatever it is applied to.

What is Red Pepper Flakes?

Red pepper flakes are also called crushed red pepper. It is a spice or condiment made from crushed, dried red chili peppers. The cayenne pepper is the primary component in many cases, while the other peppers are used in considerably smaller quantities.

This combination of spices contains peppers with a Scoville heat range of 30,000 to 50,000 SHU, such as serranos, Anaheims, and jalapenos. The flavor packs a nice punch of fire and has an underlying earthiness. When making red pepper flakes, the peppers are crushed and dried into flakes, and then the seeds are added to intensify the heat.

What is Cayenne Pepper?

All peppers, including bell peppers and jalapenos, are distant cousins of cayenne. Cayenne pepper is made by grinding and drying chili peppers from two to five inches in length, depending on the kind.

Like other blooming plants in the nightshade family, such as jalapenos and bell peppers, they are classified as vegetables. For an additional spicy kick, its hot and spicy flavor may be enjoyed in various dishes and drinks, such as hummus, eggs, and homemade lemonade.

Numerous scientific studies have shown the health benefits of cayenne pepper, including its ability to lower blood pressure and hunger suppression, alleviate psoriasis and pain, improve digestion, speed up the metabolic rate, and reduce cancer risk.

Cayenne peppers with an estimated heat level of 30,000 and 50,000 Scoville are ground into powder and sold separately as cayenne pepper. The red pepper used to make crushed red pepper, also known as red pepper flakes, combines three or four different kinds of pepper.

The combination relies heavily on cayenne pepper. However, spiciness may be tempered by the use of milder peppers. This may be the softer version of the anchor and jalapeno. This rule, however, is not without exceptions. Crushed red pepper’s heat comes from a combination of chilies that, when used together, may exceed that of cayenne.

What Made Red Pepper Flakes and Cayenne Pepper Different?

Although red pepper flakes and cayenne pepper are made with chilies, they are different in different aspects, including the following:

Adding red pepper flakes can make any food a little spicy. Add some red pepper flakes to your salad dressing for an extra spice kick. Furthermore, it also complements various savory dishes, such as pizza toppings and sauces.

On the other hand, cayenne pepper is commonly used in the kitchen, yet it also seems adaptable in the wild. Whether you are cooking Southern, Indian, Asian, or Mexican dishes, you have probably used this seasoning.

Spruce any dish with just a pinch of this sweet and spicy spice. You can use it to make enchiladas, fried chicken, beans, or mac and cheese. Also, it adds a delicious kick to meats, egg dishes, and dry seafood rubs.

Red pepper flakes, as the name implies, are primarily red. On the other hand, there is a wide variety of hues in cayenne peppers, but the most common is red. Cayenne peppers often come in red, although purple and yellow may also be seen.

Since red pepper flakes and cayenne pepper come from the same kind of pepper, the two look pretty similar to one another. Capsaicin, the conventional word for peppers, can be found in most pepper species. Furthermore, dihydrocapsaicin and capsaicin are two of the most common types of capsaicinoids. One possible explanation for the health benefits of peppers is that they contain this chemical.

Pepper fruits contain active compounds called capsaicinoids, responsible for their “hot” taste. Although lacking in flavor, red pepper flakes are often used as a garnish. This is because there are many different kinds of pepper in it. That probably indicates the taste is rather ordinary.

Red pepper flakes usually provide a mild, hardly detectable taste. It is supposed to have a milder spice level than cayenne pepper. Furthermore, red pepper flakes might have a sweet taste depending on the chili used.

Cayenne pepper’s scorching and intense heat is commonly used to amp up the flavor of anything from pilafs to sauces. Cayenne pepper’s taste is one of a kind, with a spicy, acidic, smoky, and earthy character.

When To Use Red Pepper Flakes and Cayenne Pepper

Powders are more accessible to incorporate into wet foods like soups and sauces than flakes. Cayenne pepper is your best bet if you want milder, more consistent heat throughout the dish. The meal will have more kick after all the flavors have merged. 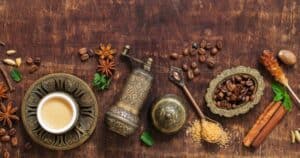 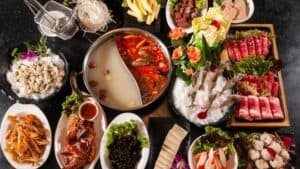 9 Spicy Things To Add for Better Hot Pot Soup Base 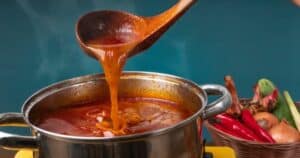