It seems absurd to reduce the heat in hot sauce, doesn’t it? After all, the sole purpose of its use is to bring heat. However it may happen that the recipe goes wrong and the heat is just too much to handle. Read on to find out how to reduce heat of a hot sauce, and whether cooking it reduces the heat.

Even the most experienced chefs get too heavy-handed with hot chilies sometimes and need help, so you are not alone. In this article, we’ll talk about how and why cooking hot sauce makes it less spicy, as well as other ways to reduce the heat in hot sauce.

How Does Cooking Reduce the Heat of Hot sauce?

The heat experienced when hot sauce is consumed comes from the chemical compound capsaicin, which gives chilies their spicy flavor. Capsaicin is concentrated in the placenta, the white membrane that anchors the seeds to the pepper’s walls. It then migrates into the seeds.

Most of the capsaicin in hot chilies is not in the seeds, as most people think, but in the flesh or walls.

Cooking hot sauce increases its heat because the chili peppers break down and release more capsaicin. However, capsaicin is volatile in steam. This means that as the sauce cooks, the steam carries the released capsaicin into the air, reducing the sauce’s heat.

It is said that capsaicin is “thermostable.” It can withstand high temperatures and even acids, but it has a boiling point of about 410–428 degrees Fahrenheit. This temperature is rarely reached when cooking chilies in the kitchen, except when grilling directly on hot coals, but capsaicin evaporation can still occur with long cooking times.

Keeping in mind the presence of other ingredients in the sauce, it is important to note that they may have contributed to the sauce’s altered heat. More ingredients in hot sauce means more flavors.

5 Methods for Reducing the Heat in Hot Sauce

Throwing away a ‘too hot’ hot sauce is the quickest solution, but it wastes the hot sauce. It’s great to know that there are better and more effective ways to reduce the spiciness of your hot sauce. They are sure-fire ways to help you maintain the integrity of your sauce if done correctly.

You have probably heard too often that drinking cold milk is a sure way to soothe a pepper seared tongue. You may have thought it was a myth as well, but it is not.

You see, casein, which is the active component in milk, has the ability to bind capsaicin and eliminate the burning sensation that it causes. The milk’s coldness acts like ice on a fire, cooling it and taming the heat.

The full package of dairy products suffices. A slice of cheese and a large spoonful of yogurt, sour cream or creme fraiche to go with the hot sauce would tone down the heat. Coconut milk is a common ingredient in many Thai recipes.

The heat of your hot sauce can be tempered by the addition of something sweet. It might be a pinch of sugar, a drizzle of  honey, or a drop of sweet ketchup. A powerful sweetener can either tone down the intensity of the hot sauce or serve as a distraction from it.

Another theory explains that because sugar is perceived by the same neurons as peppers, it may act as an inhibitor.

Amp Up The Sourness

It is the opinion of some chefs that this is the most effective method for tempering the heat of hot sauces. Vinegar is by far the most common choice, but it should be utilized with extreme caution due to the fact that even a small amount has the potential to disrupt the delicate flavor of the sauce.

The addition of freshly squeezed lemon or lime juice can reduce the intensity of the heat while simultaneously enhancing the flavor.

Add More Oil to the Sauce

Because capsaicin is soluble in oil, increasing the amount of oil in the sauce can reduce the heat. As long as your sauce can handle more fat, adding butter or olive oil will be an excellent way to reduce the heat of the capsaicin. Choose a neutral-tasting oil that won’t overpower the sauce.

Additionally, the oils in nuts such as peanuts, sesame seeds, almonds, and cashews can help to tame the heat in hot sauces. It can be used in place of vegetable oils when your recipe allows for the addition of nuts. This is typical of some Asian dishes.

In most cases, the oil can be added and later carefully poured out to wash out the capsaicin.

This is a universal method of toning down the heat in your hot sauce. Review the recipe and add more of the non-spicy ingredients to the sauce. You can start by doubling the amount and then, if it’s still too spicy, try tripling it.

Adding other ingredients that aren’t in the recipe is a good way to temper the heat. Cooked rice, canned beans, potatoes, and tomatoes are examples of ingredients that would not disrupt the flow of the sauce.

This method is not cost effective because the ingredients may not be available at the time of preparation, and you might end up making more sauce than you need.

No, it is not. Cooking peppers causes them to break down, which results in increased capsaicin release.

The longer it sits, the potential exists for hot sauce to either become even hotter or completely lose all of its heat.

Can Drinking Water Tone Down the Burn of Pepper?

Not at all. The burn may lessen with time, but water has no effect because capsaicin is insoluble in water.

Cooking hot sauce increases its capsaicin content and heat. However, prolonged cooking time of the hot sauce causes a diminishing return in heat level. There are many other options to help you restore a ‘too hot’ hot sauce back to an enjoyable state, so do not worry! 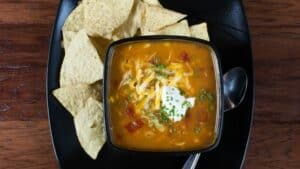 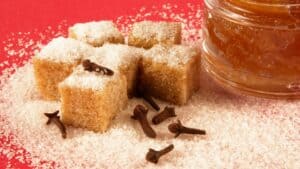 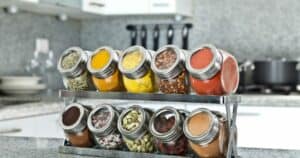 The 5 Best Spice Racks to Fit Your Kitchen 2022