Cold evenings, snow, plus bad weather are all on the horizon as we approach the Christmas season. The “Yuletide” season is soon coming, which means snowy fun is approaching! It is a treat to unwind at home with a hot bowl of ramyeon and an excellent film to keep you entertained.

Enjoy Ottogi Yeul Ramen if you love the spicy flavor of ramen noodles. Yeul Ramen resembles a warm hug—welcoming, comfortable, and just enough heat to keep you engaged. Yeul ramen features a fair amount of small vegetable particles and a meaty beef flavor. It was undoubtedly hot, but how hot was it? We shall see how it was.

How the Ramen Craze Began

As with any other meal, the history of ramen is still up for question, but most academics believe it originated in China. A 4000-year-old relic of a dish of noodles was discovered in China. It is regarded as the oldest discovery of noodles. Given the close ties between noodles and China, this expert allegation is very credible.

Moving forward, ramen became increasingly popular following World War II. Food was scarce after Japan lost the war, so it began importing wheat flour from the United States, which is a key component in creating ramen

Since they were acquainted with said Chinese noodle-eating lifestyle, those who had fled the Japanese occupation of China opened Chinese restaurants and marketed the noodles currently known as ramen.

Despite its origins in China, the Japanese later refined Ramen in many ways in other parts of the world. Ramen was developed with Japanese efforts, and as a result, it has become a favorite worldwide and a source of national pride in Japan.

In Korea, Samyang Ramen invented the quick noodle that became known as Ramen in Korea. Samyang Food Founder of the company Jung Yun Jeon brought the Japanese art of producing Ramen throughout Korea around 1963. He recruited talent from Japan for several reasons why Japanese noodles became well-known.

Jeon chose to market ramen as a remedy for the issue of post-Korean War impoverishment (Kim Timothy). This one has been marketed as just 10 won, which would be equivalent to around 1 cent in modern U.S. dollars.

Even though the main goal of ramen has been to alleviate poverty, Ramyun has quickly become a signature dish among Koreans. Surprisingly, Korea leads the world in terms of instant ramen consumption per individual.

Yeul means “fever” in the literal sense, and there isn’t a more appropriate way to describe excellent ramen than that of a fever. Similar to a fever, it gradually overtakes you until it’s too late, and you’re either dripping in sweat or fumbling to soothe the slow fire in the mouth. Despite the soup having a small habanero flavor, the original amount of spice wasn’t too severe.

Although the noodles are somewhat thinner than those in Shin ramen, they still have the chewiness we’d anticipate from quality instant ramen. Considering that this was one of the spicier ramen, it’s unquestionably worth a try, especially if you enjoy spicy food.

Ottogi Ramyon, the maker of Jin Ramyon, also produces Yeul Ramyon, a Korean instant noodle. Several of the typical traits of Korean Ramen can be found in Yeul Ramyon. The noodles are firm and springy, the broth is hot, and so it arrives in a sizable quantity (120g).

The Flavors and Smell of the Yeul Ramen

Like other pre-packaged Ramen, Yeul Ramen is greasy but excellent. The flavor of Ottogi Yeol Ramen is delectable and resembles that of the most popular spicy instant noodles. With its savory, peppery, and delicious MSG flavor, it tastes quite similar to Shin Ramen. Red hot chili paste is also added for taste and heat.

Just one aspect the Yeul Ramen is missing is a few more hearty servings of the ingredients. Spring onions, fragments of mushrooms, two really little chunks of carrot, plus possibly one or maybe two more pieces of red chili pepper could be found. Although the flakes are varied, there aren’t many of them.

Those noodles smell unmistakably hotter than they truly are. You would assume that these noodles are very spicy since that has only truly occurred with a few of Samyang’s previous offerings. That is clearly not the case, though. We could smell the spicy soup and noodles throughout the Yeul Ramen preparation process.

The Noodles of the Yeul Ramen

These noodles have the texture of little sponges. They particularly well absorbed the hot broth. Nevertheless, the noodles did immediately swell, so just don’t leave the ramen out for an excessively long period.

The noodle preparation was also good. They emerged soft but still fairly firm. Since they are plain ramen noodles, I don’t anticipate any dramatic flavor changes.

The Main Question: How Spicy Is The Yeul Ramen?

The spiciness of the Yeul Ramen, in my opinion, will vary depending on who is eating it. Some people could think it’s excessively hot, while others might think it’s much milder in comparison to other brands.

To put it another way, it may not actually be very spicy because the spiciness originates from Korean red chili peppers. However, reviews often describe Yeul Ramen as having a mild to moderate heat intensity.

This could be a good medium if you’re more sensitive to spice. With each bite, the spiciness increased, making the mouth tingle. Reviews claim that while the spice may cause you somewhat perspire, it was never unpleasant, though. For the majority, the temperature will be almost ideal.

Yeul Ramen seems to be a substantial, rich bowl of ramen noodles topped with green onions, red pepper flakes, garlic, and other ingredients. Rather than being spicy, the intensity is described as peppery. This might not be appropriate for beginners, but it’s not the hottest either.

Even though ramen has many advantages, including its low cost and ease of preparation, there has always been a serious issue with how it negatively impacts health. Most of the noodles in ramen are made of wheat and are fried. Obesity is brought on by eating too much fried and flour-based food, which further contributes to hypertension, anxiety, and other diseases.

Problems also arise from Ramyun’s soup powder. is the main culprit. USDA data indicates that a bowl of Shin Ramen has 2000mg of salt. This amounts to 80% of the recommended daily salt intake.

Given that most individuals eat three full meals a day, those who eat ramen will likely ingest more sodium than recommended by the USDA. Numerous malignancies, high blood pressure, arthritis, and perhaps other severe disorders are brought on by a diet heavy in sodium.

To minimize or, better yet, avoid the health risks and consequences, ramen intake must be moderate. 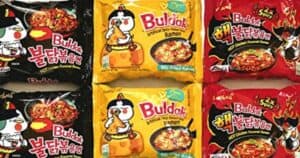 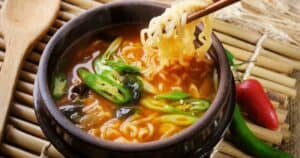 15 Things You Can Add to Buldak Ramen (Instant Upgrade) 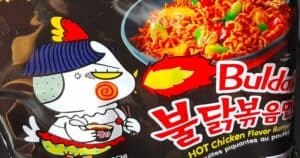